Overview of the best editors for processing photos in a browser window. Some are almost inferior to offline programs, they allow you to work with layers, make collages, etc. others are intended for processing photos, overlapping frames, effects, improving the color picture. At the top of the list are editors working on modern technologies, without the need to install Adobe Flash. All links open in a new window.

One of the most powerful Picozu online photo editor allows you to install the plug-in in the Google Chrome browser, with which the online version of the editor works faster, but can work without it, in any browser. It works with layers and has about the same basic functions as Photoshop. It works very stably, softly, pleasantly and without glitches.

A Photoshop-like graphics editor for the browser. Clear interface, there is a plug-in for the Chrome browser. Oddities may occur in some browsers, but overall a good working photo editor.

Allows you to process photos, apply effects, make collages. The functionality is wider than that of the widespread Aviary. The interface is a little unusual, but clear, it works smoothly. For an amateur. If you get used to it, it may turn out to be a convenient tool for those who do not need the power of graphic editors created in the likeness of Photoshop.

This simple photo editor works on HTML5 without Flash. Widely known and widespread thanks to millions of fans on the Android and iOs platforms, but there is also a browser version. Minimum features, simple and straightforward.

A photo editor very similar to Aviary with a huge number of filters, frames and effects for processing photos - from imitating a pencil drawing to a photo montage on the cover of a magazine.

A new version of the express editor, PIXLR X, works without third-party plugins: https://pixlr.com/x/
Pixlr X is a multi-layer editor, but tailored in the image of the editors from the Express series. 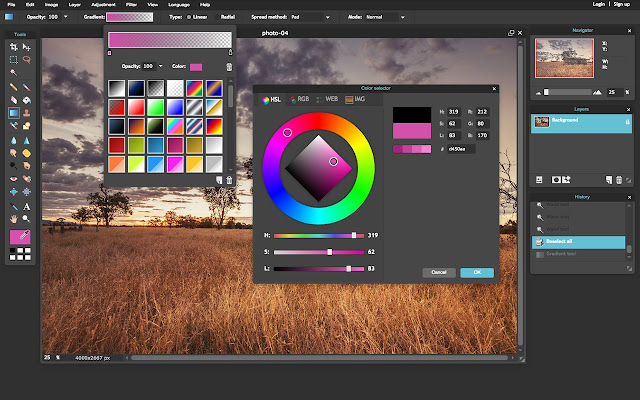 Pixlr has two versions: Editor and Express, the first is a worthy replacement for Photoshop, the second is an analogue of Adobe Aviary (perhaps more convenient than Aviary itself). Pixlr, previously developed by Autodesk, now owns 123RF. This editor is built into the user interface in our Art Club, with its help participants can edit uploaded images.

Probably no one would argue if we called Pixlr "almost professional" or "the best graphic online editor of the existing." So it is, if not for one “but”: it requires Adobe Flash to work. We really hope that this situation will somehow be resolved in the future - either a Pixlr version that does not depend on third-party plug-ins will appear, or Adobe will revive Flash. July 25, 2017 Adobe announced on his blog that in 2020, Flash support and distribution will be discontinued. Together with him, all the programs running on this technology will die, including such wonderful ones as, for example, the Pixler photo editor. At the moment, the use of Flash is no longer recommended by the largest browser manufacturers (Google, Mozilla, Apple), but you can install it at your own risk. 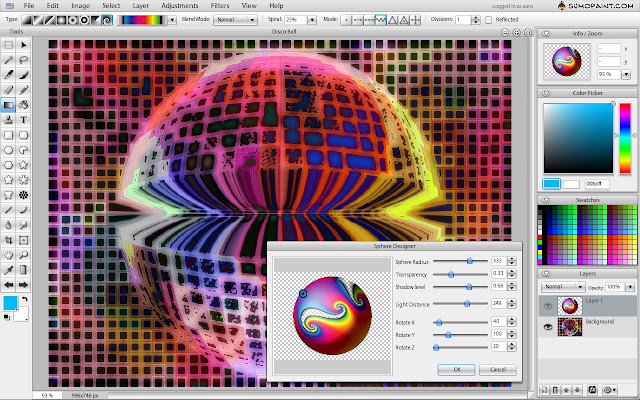 Another very solid and decent alternative to Adobe Photoshop, which also works on Adobe Flash. This editor is popular with young artists who use it for drawing. 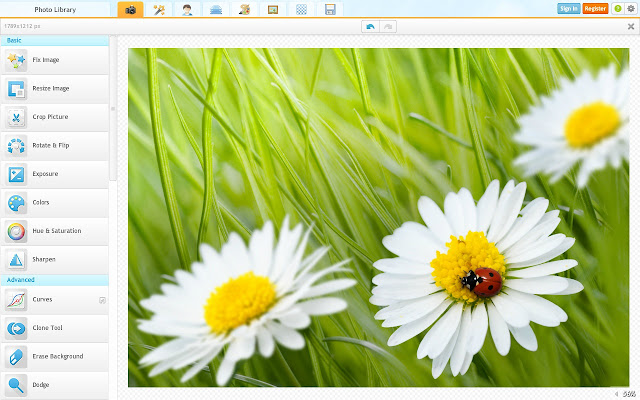