What is a mandala?

The mandala is a graphical sacralized symbol of a rather complex structure, a magical diagram that has been widely used in Hindu and Buddhist tantrism as a visual aid for contemplative practice. 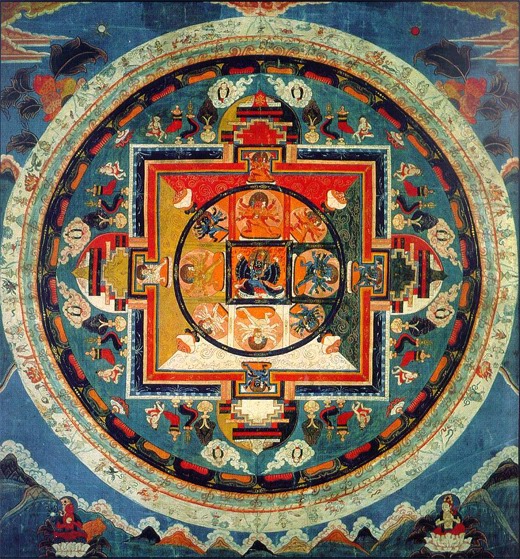 The cultural and historical origins of the mandala are explained differently by researchers. Some catch the connection of its origin with the layout of megalithic archaic structures of cultural purpose, others associate with parallel symbols of the universe, others with maps of the world depicted on shamanic tambourines. The mandala coincides with the achievement of the breadth of the universe and the attainment of spiritual depth, which gives rise to the formation of the subject of contemplation in the form of the center of the world, gathering together sacred energy.

The mandala is the outer circle, inside of which is inscribed a square containing the second inner circle. The square is oriented to the cardinal points. In the middle of each side are gates extending beyond its borders. In the center of the second circle is the main sacred symbol. Basically, the mandala is depicted on the floor, on canvases, on sacrificial dishes. It is reproduced by painting and made on a variety of materials. Specialists suggest that the original mandala was of a rectangular configuration.

What are “phenolic houses”, what is the source of mineral dust and how dangerous is it, is it worth using in the construction of your home mineral wool boards and whether mineral wool can cause cancer - some of these difficult questions already have the answers of specialists. Read a great article on the site snrp.ru

According to Buddhists, the first mandala was made by Padmasambhava, the ancestor of the Vajrayana. Tibetan mandalas oriented to the west, Indian to the east. At the same time, the basic arrangement of buddhas on the mandala did not change. Its symbolism occupies a significant place in the form of a visual aid for the companion of self-deification in architectural monuments. The symbolism of the mandala is reflected in some important philosophical models of northern Buddhism.