The history of Gorodets painting begins in the 19th century. During this period, it became one of the types of crafts that were so widely distributed in the Gorodets of the Nizhny Novgorod province. This craft is not forgotten and exists to this day. It began from the time when the bottom and comb were painted at the spinning wheel. 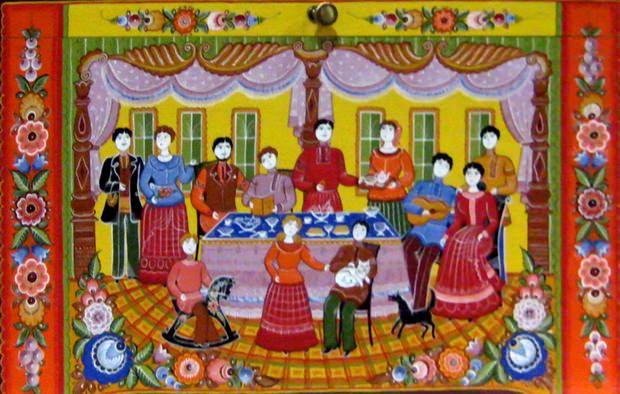 From the point of view of the technological process, this type of painting is much easier than Khokhloma, which, incidentally, also originated in these parts. The painted composition is applied directly to the board. If desired, the board is first primed. For priming, paints of various colors are taken. First, the location of future elements is indicated on the board using a pencil. The composition of the future pattern is being built. If the master is quite experienced, then this stage is not used in his work. The drawing is applied immediately using paints. The main points are carried out with paints of lighter tones, and darker elements, such as petals, buds and more, are applied to them. At the last stage, points and strokes are performed. For this, white and black colors of paints are used. At this stage, all actions are performed with a very thin and soft brush. This allows you to give the work the impression of completeness. When the paint is dry, varnish is applied. 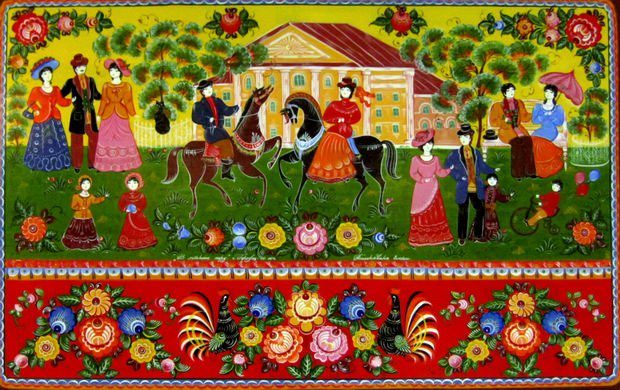 The first option is most common, because such a painting is the simplest. In the simplest versions, a single flower and leaves are depicted. Ornamental compositions are located on the sides of the product. In this way, for example, they paint bread bins. The cover contains an image of a flower, and on the sides there is a floral ornament.

In flower painting, common types of ornament are.

Flowers are arranged symmetrically. This type of painting is found on boxes, caskets and other items.

She is a variation of the bouquet. In the central part there is a large-sized flower, and on the sides there are flowers and leaves, whose size is much smaller. They can have a circular arrangement or be placed in a line. This type of painting is characteristic of bread bins, dishes, etc.

This is a kind of garland where the flowers are arranged so that they form a figure in the form of a rhombus.

She appeared from the time when spinning wheels were signed. This is a composition of a ribbon character, consisting of flowers repeating one after another. The size of the flowers is the same, but they are separated by leaves.

This is similar to a flower strip, but it closes at the edges of an object.

It is found on a wide variety of subjects. It is found on household items. Motives here have a pronounced symmetrical character. By location, they can be placed inside a flower garland. If such motifs are depicted separately, the symmetry of the floral arrangement may be preserved, or may be broken.

She is distinguished by the greatest complexity, but the most beautiful. The plots can be quite different. Here are partying, gatherings, and more. Plots from modern life may also take place. Such a painting is characteristic, for the most part, for the panel.