Names Walt Disney: Once upon a time there was an artist

An ambitious perfectionist, passionate innovator, successful entrepreneur, talented draftsman - all this is Disney! 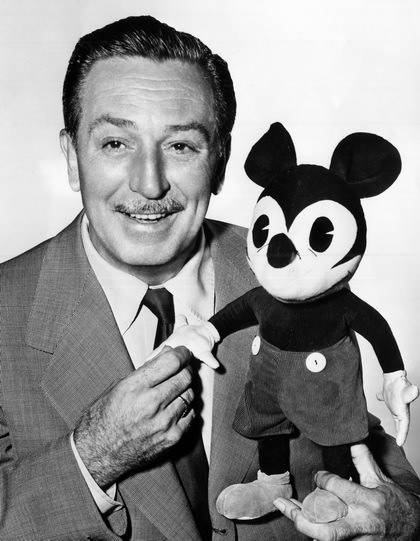 He can be admired or criticized, but one thing is certain: Disney is the recognized King of the Hill, one of the founding fathers of the global animation and entertainment industry. But for a moment imagine yourself as one of five children in a poor American family of a carpenter and teacher at the beginning of the last century, and you will understand what it was worth to climb this mountain. Here here managed to find many of his films.

The fate of the draftsman

Walter Elias Disney was born December 5, 1901 in Chicago (Illinois), from where, after five years, the family moved to a farm in Missouri. The boy’s mother played the organ in the local church and was a deeply religious woman who didn’t have a soul in her children. But his father was in an eternal search for himself and money for the maintenance of the family, and he was a supporter of education with the help of physical punishments. All his life, Walt received paternal care from his older brother Roy. Since childhood, Walt liked to draw. When there was nothing, the kid made his first drawings on… toilet paper. At the farm, he was imbued with that love for animals, which then filled the life of his cartoon characters. Once a neighbor, amazed at the talent of a child, bought from Walt a drawing for 25 cents. The boy not only sold his cartoons, but also paid, for example, with a local hairdresser. And from the age of 8, at the request of his father, Walt worked as a peddler. In 1917, the family again moved to Chicago, and Disney began to study at the evening department of the Academy of Fine Arts. He also worked part-time at a factory and drew cartoons for a school newspaper. Towards the end of World War I, 16-year-old Disney goes to serve as a driver in the Red Cross and leaves for France.

By the way, he painted his ambulance with his own drawings. When he returned, he got a job in the Kansas City newspaper, but he was fired a month later due to "inability to draw." In the newspaper, he met with Ab Iverks, and they became partners for many years: Ab has a more developed artistic vein, Walt has an entrepreneurial and innovative one. In the garage, converted into a studio, they shoot a series of animated films “Laughter”, which are played in a local cinema. However, in 1923 their studio went bankrupt. In the same year, Disney (having $ 40 in his hands received from the sale of the camera) went with his brother Roy and Iverks to Hollywood. A brother lends him money from his military pension. Soon, Disney and Iverx receive an advance from the distributor for the Alice’s Wonderland series. Disney is proud that he came up with a combination of animation and live actors, and believes that his new idea will attract "representatives of all classes and will certainly conquer the screen." The film comes out in 1924, and a year later Walt marries Roy’s best friend, Lillian Bond, who worked for them in the studio. So by the age of 24, Disney becomes a married man and the owner of a cartoon studio. And after 2 years, Disney and Iverks created their first popular character - the Oswald rabbit. Soon the rights to it were taken away from them by the distributor, who also lured some of the employees. Ahead of Walt, several more similar crises, betrayals, failures of his studio and projects (both in the 40s and later) were waiting for him, but he never gave up. After Oswald, his next character was Mortimer Mouse, whom Lillian proposed renaming to Mickey. The cheerful little mouse, Disney’s alter ego, made his debut in two silent cartoons, and in the third film with Mickey Disney already used voice acting. It was "Steamboat Willie" (1928), from which the triumphal procession of the little mouse around the world began. In the 30s, the whole Mickey Mouse Universe appeared (Pluto, Goofy, Donald Duck, etc.)

And yet, above all, Disney was an innovator. Each of his films was a new step in the development of the art of animation. For example, in the next film after Steamboat - Funky Symphonies - the characters moved to a pre-recorded sound. And in 1932, Disney first shot a cartoon on a three-color film (“Flowers and Trees”). Soon, a camera was created at the studio that was able to shoot from several plans: it allowed us to achieve greater realism and create a perspective effect. Since the beginning of the 30s. Disney dreamed of a feature film, but all colleagues were against it. And in 1937, "Snow White and the Seven Dwarfs." At the box office, the film immediately collects millions of dollars. It was followed by other feature films - spectacular, with unforgettable melodies and life-affirming stories. A special place is occupied by Fantasy (1940). It all started with the short film Sorcerer’s Apprentice, with which Disney wanted to revive the fame of Mickey Mouse. But he got so carried away that he again created something new - a collection of 9 episodes, where a live orchestra, music of great composers and hand-drawn association stories were combined into a unique work. For the first time in the film, stereo sound appeared on the wide screen. Fantasy received two Oscars (1942), and in 1990 it was added to the US National Film Register.

In 1955, Disney’s long-held dream of an amusement park for children and adults came true: it opens Disneyland in Anaheim (California). In the 1960s and 70s, Disney was at the zenith of fame. His films and series reign on television. In 1965, his musical “Mary Poppins” with Julie Andrews and Dick van Dyke was unanimously recognized by critics as a masterpiece (five Oscars): Walt put together everything he achieved in film and animation. But a year after the release of Mary, Walt Disney left our world. And since the 70s, the studio, like any empire that has reached its peak, has experienced years of decline. Critics accuse her of lowering quality and stamping. But already in the late 80s and early 90s, new masterpieces appeared: The Little Mermaid, Beauty and the Beast, The Lion King, etc. Reprinted in updated formats of the Disney classic. And again, millions of children and adults are reviewing his films, plunging into the atmosphere of a fairy tale and regaining children’s faith in good and miracles.

Favorite characters delight children and adults in Disneyland Anaheim, Orlando, Paris, Hong Kong, Tokyo 4 Disney’s innovative ideas have always been ahead of their time, not without reason in his collection of 32 Oscars. Nobody has beaten this record yet!

In October 2014, the largest theater company Stage Entertainment presented the famous musical Beauty and the Beast in Moscow. This year marks 20 years since the world premiere of the musical, based on the animated film of the same name by Disney (1991), took place on Broadway. The musical was in Russia in 2008–2010. But finally, the production has been resumed, and we have the opportunity to enjoy one of the most popular love stories in the world performed by Russian artists.