This person is a cult and almost the most mysterious person of the Middle Ages.

All his creations are shrouded in secrets and legends and still cause controversy in the circles of learned men. Some say, for example, that in his works Leonardo encoded the secret meaning of the Bible and reveals the true history of Christ. Others believe that da Vinci’s canvases are dotted with symbols that will lead to unthinkable treasures and shrines, for example, the Holy Grail. Some are convinced: the artist in all his famous paintings portrayed the face of God! One has only to bring a mirror to a certain section of the canvas, on which the hands of the characters can point, as the formidable Jewish god Yahweh, or the Christian Lord, and maybe even Satan, will look at us from it.

Even at a very young age, Leonardo began to practice painting in the studio of the artist Andrea Verrocio. He later moved from a small town in the west of Florence to Milan, where his talent developed to incredible heights.

Everything that only the hands of a genius touched became an invaluable work of art or science. In his manuscripts there are technical and anatomical drawings, diagrams of apparatuses and machines never seen before, which later helped Mankind to take a step towards progress. Leonardo explored the world in all its manifestations: he was fond of botany, geology, anatomy, physics, astronomy, mechanics, due to which he made many discoveries. But the world knows him, first of all, as a great artist, architect and sculptor.

During his life, Leonardo da Vinci created invaluable masterpieces. Many of their bottoms now belong to world art and are stored in the best museums in the world: the famous fresco “The Last Supper”, the altar image “Madonna in the Grotto”, the ideal “Vitruvian Man” in its proportions, the painting “Madonna and Child”, and, perhaps, the most stunning and mysterious portrait - "Mona Lisa" …

Many contradictions caused the first commercial order of da Vinci - the altar image for the chapel of the Immaculate Conception - “Madonna in the Grotto”.

The picture exists in two versions, one of which is in the Louvre (Paris), the other in the National Gallery of London. The artist began work on it in 1483, but at first he left the picture with himself because of problems with customers about payment.

He completed it only 10 years later, but planned to make a repetition of the picture. And in 1508, with the participation of his pupil Ambrogio de Predis, the artist, somewhat modifying, nevertheless finished the second version of the painting, which is now located in London. Images on these two canvases are very different.

The painting depicts the meeting of the Virgin Mary with little John the Baptist and the archangel Uriel. The action takes place in a rocky grotto of the Egyptian desert. The Holy Family was allegedly hiding here from King Herod. This episode is not described in the gospel, but it is an integral part of Christian mythology. 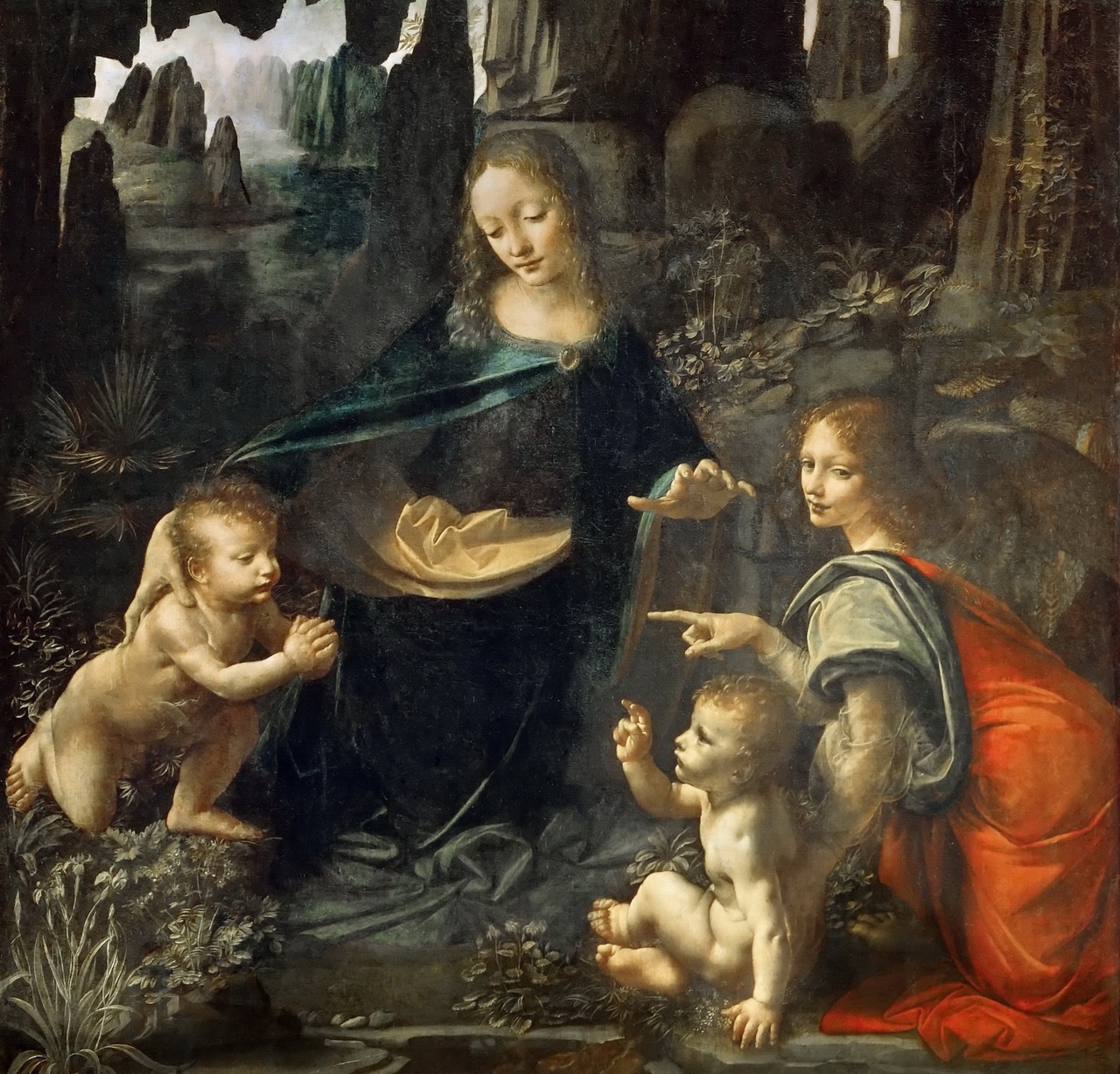 In the center of the cave we see the Virgin Mary, near which there are two babies. It is believed that the child who sits on the right of Mary, and whom she hugs on the shoulder, is John the Baptist. On the other side of it is little Jesus. He sits with legs crossed, and with his right hand as if blessing the second boy. At Jesus over the head hangs the palm of the Mother of God and the finger of the archangel Uriel stretched forward.

The figures of the characters look somewhat larger, halo are drawn to their heads. Archangel Uriel no longer points a finger at the baby sitting to the right of the Mother of God, who this time holds an elongated cross - a symbol of John the Baptist. 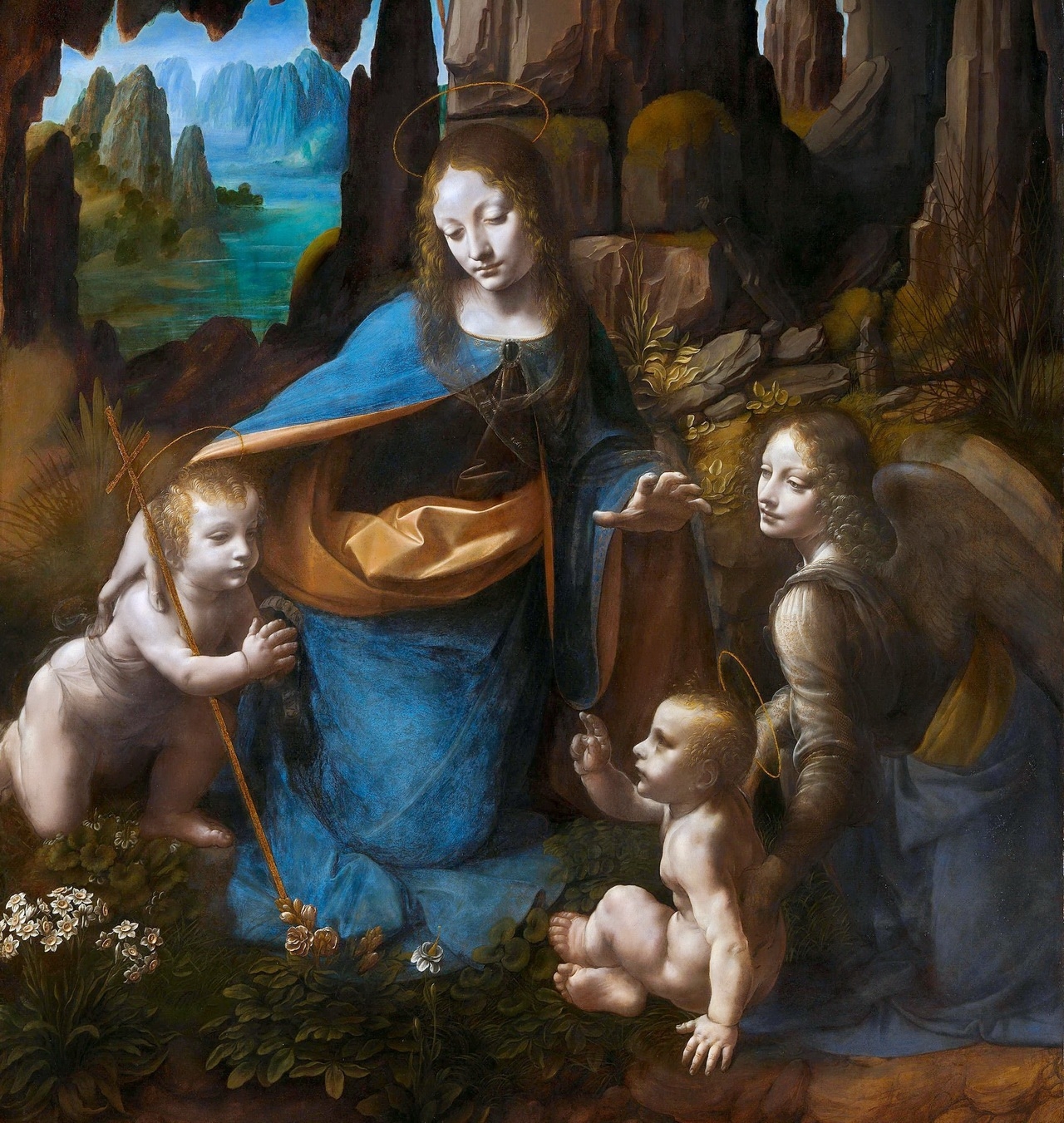 Fans of unraveling codes and secrets saw in the first version of the picture a secret message: the baby near Mary is not John, but Jesus, and it is he who worships John the Baptist, and not vice versa! This is in accordance with the tradition of the Templars, who, first of all, worshiped and worshiped John. And that means that Leonardo himself was close to this mysterious order. Well, or his Master, according to the writer Dan Brown and his followers.

If we return to the theory of mirrors, its followers hint: take a closer look at the Madonna in the Grotto, armed with a magic glass, and you will see many interesting biblical characters…

True or not, it is not yet known, but knowing Leonardo’s love for mirrors and his passion for secret fonts that are read only in reflection, one can assume anything.

In general, the painting “Madonna in the Grotto”, like other da Vinci’s masterpieces, does not bring us any closer to unraveling his secrets. On the contrary, it exacerbates the veil of mystery of his person. And this encourages scientists around the world, as well as ordinary people, to explore, investigate, guess, guess, and simply admire the great art of the Master.

Well, those who want to personally see this and other mysterious canvases, and put forward their theory, can go to the Paris Louvre and touch these creations at any time (just do not touch it with your hands!).