Portrait of an unknown. On the investigation of the false portrait of Lobachevsky brush Schegolkov

The first official mention of this portrait appeared in 1903 in the second volume of the History of Kazan University, compiled by Professor N. P. Zagoskin. The portrait was printed with an explanatory inscription: "Nikolai Ivanovich Lobachevsky, professor of pure mathematics, in his young years." Six years later, he was reprinted in the book of N. I. Lobachevsky "Geometry". And in 1916 in Kazan, at the exhibition of paintings “Artistic Treasures of Kazan”, a portrait of a young man in black drew the attention of visitors. The signature read: “Goldfinches. Portrait of Nikolai Ivanovich Lobachevsky (oil). Property of the Mathematical Society at the Imperial Kazan University. ” 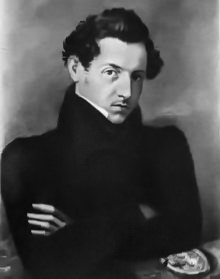 Schegolkov - Portrait of an Unknown
(b / w photo)

The portrait was repeatedly reproduced in various studies about Lobachevsky. He was also placed in the first volume of the complete works of the scientist issued by the State Publishing House of technical and theoretical literature.

What did they write about the portrait?

In 1926, an article about portraits of Lobachevsky was published by P.E. Kornilov. Describing Shchegolkov’s picture, Kornilov noted that Lobachevsky “is depicted as a man of maturity, almost a youth, with barely piercing vegetation on his lips and cheeks, but with a characteristic thick, naughty hat of hair. Depicted on the chest. 3/4 to the right (from the viewer), with arms crossed on his chest, his elbow resting on the top of the cannulated column, on which lies a fragment of a marble bas-relief. "A black frock coat, hands are hidden in white gloves, a black scarf with a pin on the neck… In technical execution, a master with temperament, skill, but with a rather limited palette is felt."

It was further reported that, according to the scientist’s great-nephew, the portrait used to belong to Lobachevsky’s son and was “paired with a portrait of N. I. Varvara Alekseevna’s wife”.

In another study, Kornilov talked about the artist who painted the portrait. Arzamas tradesman Vladimir Schegolkov graduated from the art school of A. V. Stupin. Since 1836 he worked in the Perm gymnasium as a teacher of calligraphy, drawing and sketching. Shchegolkov was in Perm until 1851, and then he was transferred to the Irkutsk gymnasium.

On the reverse side, a portrait executed by him - the inscription: “P. from nature. Goldfinch ". In 1926-1927, the portrait was cleared and fixed on a new canvas. All experts (V.F. Kagan, A. B. Modzalevsky, B. G. Kuznetsov, P. M. Dulsky) were sure that V. Schegolkov depicted N. I. Lobachevsky and that this was the first youthful portrait of a scientist related to 20 years of the XIX century.

For the first time, the Leningrad historian B.V. Fedorenko doubted this. Oddly enough, the researchers did not pay attention to one contradiction: since the picture shows a young man, then this portrait could not be paired with the portrait of his wife. Lobachevsky married at the end of 1832, almost at the age of forty. Moreover, Schegolkov could not paint a portrait only in the early 30s, after graduating from art school, that is, again, when Lobachevsky was about forty years old.

Another detail. The young man in the picture Shegolkova brown eyes. Meanwhile, Kazan artist L. D. Kryukov, who knew Lobachevsky well and painted several of his portraits, depicted a man with gray eyes. The son of a scientist and contemporaries in their memoirs about Lobachevsky also speak of gray eyes.

So, if Schegolkov wrote Lobachevsky in his youth from life, then only when he himself turned twelve. But the portrait testifies to mature skill.

After studying the materials, Fedorenko suggested: the portrait of a young man in black is a test work of Vladimir Schegolkov, performed in the presence of members of the pedagogical council of the Nizhny Novgorod gymnasium and then submitted to the Academy of Arts for the issuance of a certificate for the title of drawing teacher to Schegolkov.

To confirm this hypothesis, Fedorenko turned to forensics.

Having studied various reproductions from the portraits of Lobachevsky and two photographs, the experts came to the conclusion: for a comparative study, the most suitable is a reproduction from a portrait by L. D. Kryukov. Here Lobachevsky is depicted in the same perspective as the young man in black in the portrait of Schegolkov.

Forensic scientists took photographs of portraits on the same scale, taking as a basis the distance between the centers of the pupils. Control reproductions were imprinted with a coordinate grid so that its horizontal lines ran parallel to the line connecting the pupils of the eyes.

Each photograph was examined separately, noting those signs of the head and face that made it possible to individualize the appearance according to the method of verbal portraiture. Then the signs of one portrait were compared with the signs of another.

Forensic scientists have found significant discrepancies between the portraits - in the ratio of the sizes of the parts of the face and especially in the individual signs of appearance (in the form of eyebrows, tragus, anti-tragus, earlobe, neckline, location of the base of the nose, direction of the corners of the mouth, the presence of a vertical groove on the chin of a young man in black and its absence in the portrait of Lobachevsky).

It became clear: the portrait of V. Schegolkov depicted not mathematician N. I. Lobachevsky, but some unknown young man. Nevertheless, experts could not give a full guarantee: one always has to reckon with the subjective perception of the artist, who, when creating the image, may not strive for documentary accuracy.

But, in any case, it is more correct to assume that in the geometric office of Kazan University hung a portrait of the "unknown", and not N. I. Lobachevsky.