For the first time in Russia: 35 paintings by Frida Kahlo exhibited in St. Petersburg

ST. PETERSBURG. An exhibition of the famous Frida Kahlo has opened in St. Petersburg. A collection of 35 paintings by a Mexican artist can be seen at the Faberge Museum. For the first time, an exposition of such a scale was brought to Russia. 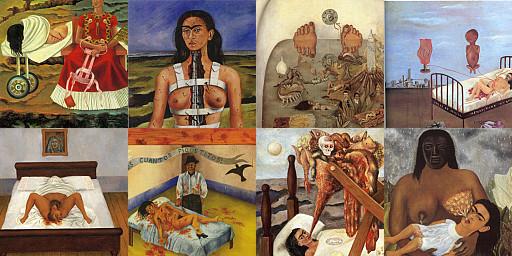 A retrospective of the canvases of the Mexican Frida Kahlo (1907-1954), whose heyday was in the 40s of the last century, was a significant event in Russia. The artist’s paintings are recognized in Mexico as a national treasure, so their display outside the country is subject to strict rules. Thanks to the interaction of the Cultural-Historical Foundation “Connection of Times” with Mexican representatives, with the owners of private collections, it was possible to agree on an exhibition of most of the paintings that can be exported abroad.

Museum director and foundation chairman Vladimir Voronchenko told the press how paintings from Mexico were delivered to Russia. The Mexican side has limited the number of paintings carried by one mode of transport. Therefore, to transport the entire exposition, four aircraft and four cars were required.

What are the paintings of Frida Kahlo so famous for? It is believed that her work has revolutionized the art of those years. Having no professional art education, Frida captivated lovers of fine art with her extraordinary look at her own life. Representing herself surrounded by relatives and close people, she began to use symbolic images in painting, graphics, linocut (in some paintings you can see red connecting threads, individual objects). For the first time, she openly and atypically showed mental suffering and physical pain, avoiding politics, religion and other social events.

The artist herself suffered a lot in life. In her youth, Frida was seriously injured in a car accident. The tram rail crippled the girl, piercing her through. Difficult months of rehabilitation followed in the hospital. For Frida, who played soccer and boxing in her childhood, and as a student, was an activist of a closed youth organization, the immobile existence in the hospital ward became unbearable.

To pass the time, the father adapted a homemade easel for his daughter. At this time, the girl began to paint self-portraits, which until the end of her life remained her favorite genre in her work. Looking at her reflection in the mirror, Frida began to convey on paper not only external features, but also internal experiences. The Mexican’s own face and body carried through all of creativity. In some drawings, she surrounded herself with birds and animals, in others, she revealed internal pain, exposing her heart (Two Frida), a broken spine (Broken Column), suffering from the inability to have children (Henry Ford Hospital) or constant husband cheating ("A few scratches"). She gave herself to beloved people, one of whom was the famous Russian revolutionary Lev Trotsky. Later, the artist explained her addiction to the self-portrait genre by the fact that her face and body are always nearby and she is best known to the rest.

The works of Frida Kahlo show the influence of folk culture, which she, as a staunch patriot and communist, actively promoted. Frida wore Mexican national costumes in everyday life, along with her husband, the artist Diego Rivera, collected antique objects. Some of the artist’s paintings reflect her fascination with the pre-Columbian period of America (the painting “The Nanny and Me”).

Contemporaries recall her as a shocking woman who loves alcohol and cigarettes. She stubbornly overcame all the hardships associated with health, did not hide the sexual relations that she had tied up in response to her husband’s betrayal. However, shortly before her death at the age of 47, Frida Kahlo wrote: “I hope that the departure will be successful and I will not be back.”

The exhibition opened on February 3 at the Shuvalov Palace, its work will last three months. The paintings of the legendary Mexican artist brought to Russia from Mexico were partially provided by the grandson of Diego Rivera from the family collection fund, the Arvil Gallery and the Dolores Olmedo Museum. In addition to the paintings and drawings of Frida Kahlo, visitors to the exhibition will see more than a hundred photographs, as well as an exposition of national Mexican costumes.