March 13, 2012 Mikhail Piotrovsky presented to the public the result of 12 years of work: restorers not only cleaned the old varnish from the painting, but also got through later décor to the original image created by Titian (the painting was restored in the 19th century, applying a layer of low-quality paint, which by 1999- mu began to delaminate). As a result, the face of the Virgin Mary changed, it turned out that Joseph had long hair, and the tree in the picture looked different. Restoration of the canvas painted by Titian in 1507, specialists The Hermitage started in 1999 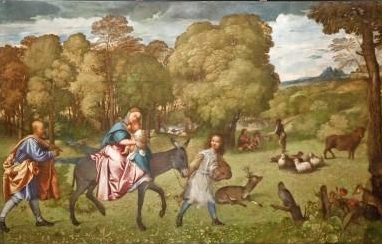 The canvas of Titian “Flight into Egypt” is considered to be his first major work, unique in particular because it seems to keep the secret of the formation of the talent of the great Master, being considered not like any of his subsequent creations. It appeared in Russia in 1768, being bought by Catherine the Great and housed in the Hermitage. Previously, the canvas was listed in the famous collection of Count Bruhl in Dresden. What is the history of this work, restored several times and presented on March 13, 2012 to selected visitors to the Hermitage in an updated form, after a painstaking restoration that lasted 12 long years?

At the very beginning of the XVI century, when the young Titian Vecellio did not yet have his own workshop, but first worked with Bellini and then Giorgione, his talent was already attracting attention, and the artist himself worked on the frescoes of the Fondaco dei Tedeschi palace, the German courtyard in Venice. According to Vasari, at that time Titian showed an interest in German painting, especially in the landscape, which was perfectly embodied in its tradition. It was then that he painted the landscape for a painting on a plot from the Bible "Adoration of the Baby." It was this story that Titian was going to write in a carefully crafted, wonderful landscape. What made him change his original plan is now unlikely to be possible to find out. The painting was written for a private house and in its final form presented a plot dedicated to the saving flight to Egypt of Joseph and Mary with Jesus from King Herod. Restorers of the Hermitage in the 21st century reliably established the fact that the future great Master painted three figures already on top of the landscape, and at first they were placed in the middle of the canvas, but then they were shifted to the left of the center. Perhaps it was the landscape that made Titian make such a compositional decision. And it really is worth it: the animals amazingly painted almost in the foreground, the crowns of the trees removed in perspective, with the shepherds sitting in their shadows, are so enchanting that it is difficult to look away from them.

“Flight to Egypt” was restored in the 18th and 19th centuries, but imperfect working methods resulted in excessive layers of varnish on the surface of the canvas, which made it uneven and faded, the painting was partially damaged. Most likely, the dimensions of the canvas have changed, compared with the original ones. Hermitage restorers carefully examined the picture and made a few more discoveries. It turned out that Joseph’s long hair did not belong to him at all, and Titian wrote it almost hairless. Thus, he was returned to its original appearance. Thanks to the work of the restorers, the face of the Mother of God became more expressive, and the colors of the painting sparkled with light. The landscape suffered from the varnish more than the figures, and the clouds in the sky remained darkened due to the inability to completely remove it. It is possible that future technologies will complete the restoration process, and the picture will become even closer to its original appearance.

In the meantime, Mikhail Piotrovsky proudly demonstrated the results of the long work of his employees and said that the canvas of early Titian would be sent on a trip to his native Venice and London, and upon return he would take a place in the Winter Palace exposition. Demonstration of the picture abroad will allow researchers of the Italian Renaissance to create a complete and complete picture of Titian’s early work.