MOSCOW. The jury of the Parabola Prize announced the list of 2016 laureates.

The Parabola Prize cannot be called purely literary, although it was established by the memorial fund of Andrei Voznesensky, the famous sixtieth poet in his 80th birthday. Representatives of various types of art become laureates: those who are patronized by Euterpe, Erato and Calliope, and those who are sponsored by Melpomene. “Art, love and history are rushing along a parabolic trajectory!” 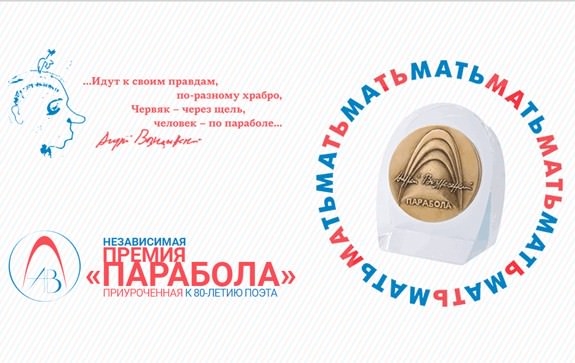 The material equivalent of the prize is small: the winners in the main and anti-crisis nominations receive $ 10,000 each, young talents - $ 5,000 each. However, for creative people who did not manage to fit into difficult times in all respects or who did not want to cheat for the sake of more satiety, such a reward is a joy and help. The writer, film director, screenwriter Irakli Kvirikadze, the winner of Parabola 2016 is one of these, prefers to work hard, not recalling his merits and nomination for an Oscar. Released in 2016, the book “The Boy Walking the Wild Duck” (stories about the exploits of a big father for a young son) are witty, philosophical and poetic memories of life, meeting with geniuses and just good people. “Boy” was nominated this year for the Big Book National Award.

The jury members - Zoya Boguslavskaya, Dmitry Bykov, Alla Demidova, Elena Pasternak, Alexey Rybnikov and Oleg Tabakov - noted, in addition to Kvirikadze, representatives of other creative workshops. Theodor Currentzis received another award in the very successful year for him: the title of conductor of the year from the prestigious Opernwelt, the Kairos and ECHO Klassik 2016 awards, and now Parabola. In the main nomination, the wonderful actor Timofei Tribuntsev was noted, whom some critics compare with the young Smoktunovsky. Youth awards were also given to actors - Mkhatovets Alexander Molochnikov and Philip Avdeev (student of Cyril Serebrennikov, who survived the tragedy of the musical "Nord-Ost"). The anti-crisis award was encouraged by the talented composer Dmitry Kurlyandsky.