Focus is on people who shape the face of modern British culture.

Nizhny Novgorod. The first festival of British documentary films IN FOCUS has opened.

The British Council international organization has been working in Russia since 1992. One of the areas of activity of the British Council is cooperation in the field of culture and art. Among the most resonant projects are exhibitions of artists from the shores of foggy Albion and the holding of the annual festival “New British Cinema”. 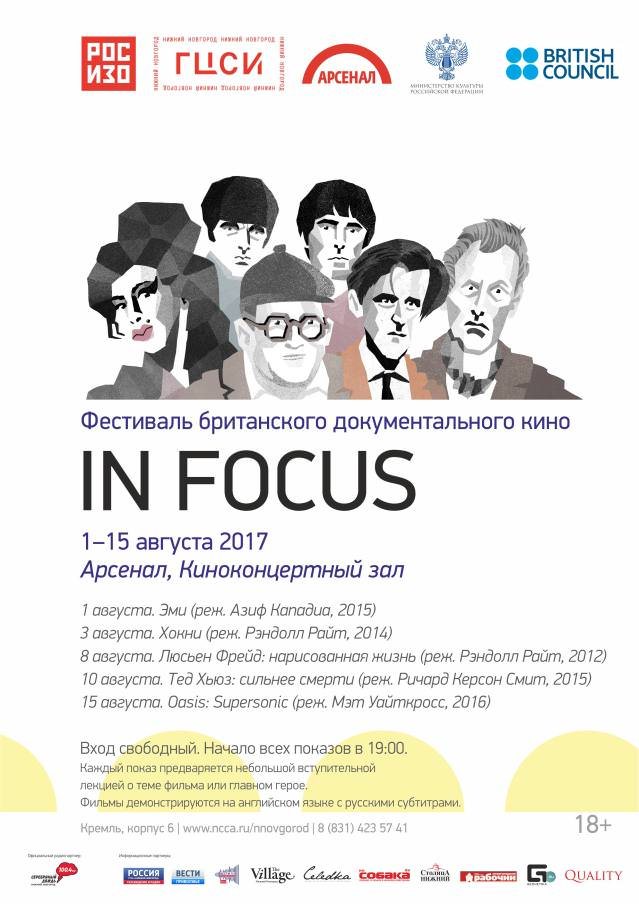 Since August 1, BS, together with the Arsenal Center for Contemporary Art, has been hosting the first IN FOCUS Documentary Film Festival with free attendance at the sessions. The program includes five films about personalities that determined the face of modern British culture. Asy Kapadia’s Amy film about singer Amy Jade Winehouse is the recipient of almost all of the major film industry awards: Academy Award, BAFTA, MTV Movie Award, European Film Award, EMPIRE. The exceptional musical talent and the enormous popularity of Winehouse did not become that protective armor that would protect her wounded heart, delayed the tragic end.

Matt Whitecross (Matt Whitecross) - a story about the cult group Oasis, created by the Gallagher brothers and became a legend "in life". Her story is a huge commercial success, a record of the famous album What’s The Story Morning Glory, fantastic concerts in Newbort. Unsightly wrong side - drugs, irreconcilable rivalry, scandalous collapse of the team.

In the picturesque section of IN FOCUS, there are two films by Randall Wright. "Hockney" - a kind of video diary of a classic of British painting, celebrating July 80 80th anniversary. A famous artist, creator of works in the technique of photo collage (joiners), the author of the hypothesis about the use of a pinhole camera in classical painting. The focus of the story is an hour and a half painting “Lucian Freud: A Painted Life” - a rebel, provocateur, one of the most successful representatives of the field of figurative painting, the grandson of the founder of psychoanalysis.

"Ted Hughes: Stronger than Death" (Ted Hughes: Stronger than Death) - a version of the fate of one of the most significant British poets, holder of the lifetime title of "Laureate Poet", as well as numerous titles and awards, proposed by director Richard Curson Smith ) Brilliant literary career and tragic breaks in his personal life. A series of suicides - the wife, talented poetess Sylvia Plath, mistress Asia Wevill, who took her life not only herself, but also her young daughter - became the reason for the negative attitude towards the poet of a considerable part of the public. One of the key moments of the film is the first interview with the daughter of Plath and Hughes Frida. Their son Nicholas, who worked as a marine biologist, hanged himself in March 2009 in his home in Alaska in a state of deep depression.