Exhibition project “Alexander Kabin. The Old Eternal ”will be held at the ARTSTORY gallery from February 11 to March 28, 2021. The two main lines of the artist’s first personal exhibition in Moscow - man and space, are associated with memory, traditions, and culture. What do these words mean for each of us? Memories? Sensations? Experiences? The booth invites the viewer to read "The Old Eternal" on their own, deliberately not indicating punctuation marks. 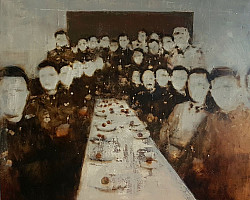 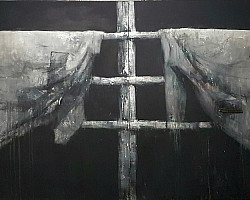 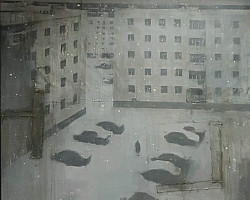 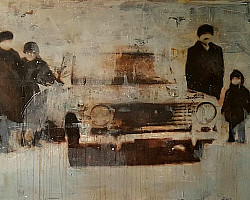 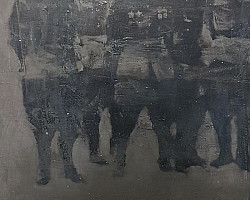 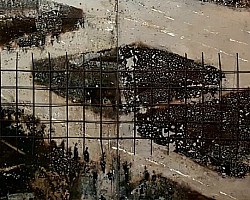 Laconic monochrome industrial landscapes, twilight railroad tracks, typical panel houses in a thick haze, faded photographs without faces… Whether our memories of the life of our ancestors, or their life invading our present.

Alexander Kabin is an artist from the north, so his palette is composed of restrained colors, with a dominant caban gray. And it helps to demonstrate mastery of working with halftones. Such an approach in work becomes the reason for the appearance of non-obvious images that require some effort to be read. His style can be called "expressive realism" - the artist seems to be looking through an imaginary photographic lens, playing with sharpness and focus, while the paintings are not read as a photograph, but as something big, passed through, meaningful.

The Dilapidated Eternal project includes three new series of works at once: Boots, Alien Memory, and Hierotopia. The artist works in series, in which the paintings appear as parts of a single story, complementing each other. The plots - landscapes, roads, workshops, groups of people, holidays, a feast - refer to the aesthetics of the "severe style". There is, however, a significant difference: on the canvases of the Cab there is no "heroism of working days", but the impression of a loss of the past appears: due to the complex texture and dark, "copper" tones, when the image loses its bright sound, fades and "becomes covered with rust." Interestingly, this effect does not cause rejection, but, on the contrary, carries a specific aesthetics, comparable to the sound of Anselm Kiefer’s works.

The series "Boots" is an understanding of the current reality with an increased degree of militarism. Boots are here - as a symbol of the military, tragic. “This is a return to historical events from the present time. I try to remember them without loud patriotic statements. More from the side of the tragedy of our people, ”says Kabin.

"Alien Memory" is a kind of collective storyboard family photo album, where each photograph is raised to the rank of a picture. Such an album with typical plots is typical for every family. People in works are impersonal, this technique allows the artist to create a generalized image. Alien memory - how alien is it, and how universal is it for each of us?

Finally, the series “Hierotopias” (from the Greek “creation of sacred spaces”) are spaces and objects created by man or conquered by nature. An endless snow-covered field and an industrial temple - an abandoned workshop - resonate with each other. In the center of the exposition, the viewer will meet a dead wood heracleum (cow parsnip) unusual for exhibition spaces. The almost alien form of this weed, its graphic architecture, will allow the visitor of the exhibition to look at the paintings from an unusual angle - through the gap of the stems.

Many canvases of the Cab are created not only with the help of paints, but with the addition of active work with the base. “The most important thing for me right now is tactility,” says the artist, who has recently been increasingly using a “rough and uncompromising” material - tarpaulin. Large jobs are often formed by gluing these tarps together with patches and rough seams. "And such a patch texture begins to play along with the idea - it is also just about the old and eternal, this is the essence of our eternal patch."

Alexander Kabin was born in 1978 in Severodvinsk. Graduated from art school. From 1996 to 1999 he worked in the workshop of the Severodvinsk artist. Has a higher technical education. Laureate of various awards and competitions. Among them, in 2012, he became a laureate of the All-Russian competition of paintings and graphics, dedicated to the 175th anniversary of the Russian railways. Since 2017 he has been living and working in Yaroslavl. Works are in the Erarta Museum (St. Petersburg), JSC Russian Railways, PJSC RusHydro, in private collections in Russia, Australia, England, Switzerland, Germany, Norway, France, USA, Latvia, Lithuania.