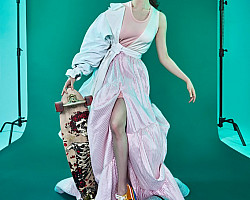 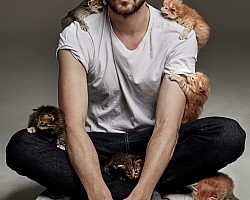 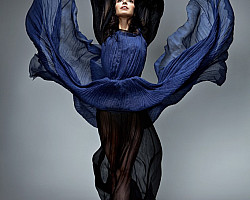 Danil Golovkin is one of the most frequently published photographers of Russian gloss. Danil’s lens was visited by the main Russian media figures - from Alena Doletskaya, Fyodor Bondarchuk and Theodor Currentzis to Natalia Vodianova, Sergei Polunin and Paulina Andreeva.

Golovkin’s path to fashion photography began 10 years ago, on the set for a special edition of ELLE magazine. Thanks to Danil’s colossal hard work and talent, his photographs have firmly established themselves on the pages of the largest fashion publications. A graphic artist by training, he does not just photographs demanded by editions - he creates extraordinary images for the top officials of Russian show business.

Danil shows his models from new, unexpected sides. The rebel Basta, building a fragile house of cards, the unpredictable Renata Litvinova in an octopus dress, Semyon Slepakov in the image of the "Son of Man" by René Magritte - Golovkin’s portraits leave the feeling that now you know a little more about their heroes. Perhaps that is why they are taking over social media so quickly and turning into business cards for celebrities captured by the photographer.