There is nothing more practical than a good theory.
Immanuel Kant
We must paint as if it were.
Rene Magritte

From the point of view of modern sciences, we all live in hybrid communities (hybrid - mixture, cross). In these communities, human collectives (assemblies) interact with machine collectives. Now on the screens of our favorite gadgets we see the faces of people close to us more often than in real life.

Our desires and needs are transformed and realized by smart machines. Animated actors (actor - lat. Activist) enter into a complex relationship with the inanimate, creating a network of hybrid reality. An example of such an interaction is a drug pill (an inanimate actor) and an organism (animate actor), which, thanks to it, restores its functioning.

I am trying to explore these complex interactions in a hybrid Universe and psychoneurology as a psychotherapist and graphic artist. 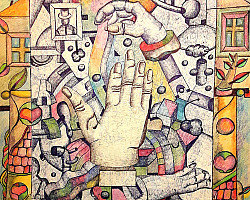 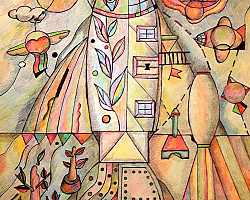 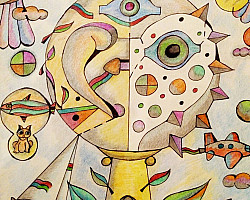 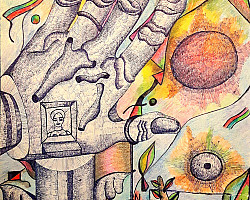 Edmond G. Eidemiller - MD, one of the founders of family psychotherapy in the USSR, a psychiatrist and an analytical system (network), individual, group and family psychotherapist, head of the Department of Pediatric Psychiatry, Psychotherapy and Medical Psychology, I. I. Northwestern State Medical University AND. Mechnikov. Born November 26, 1943 in Tikhvin. He graduated from the 1st Leningrad Medical Institute named after I.P. Pavlova. He worked as a psychiatrist in Yoshkar-Ola, at the Leningrad Psychoneurological Institute. V.M. Ankylosing spondylitis. Since 1982, he worked in LENGIDUV, now SZGMU them. I.I. Mechnikov. In 1965 he entered the group of artists "St. Petersburg" by Mikhail Shemyakin.

As an artist, he works in the paradigm of visual-cognitive synthesis and actor-network theory. Developing these theories, Edmond Eidemiller embodies the interaction of two reciprocally connected sinusoids - thoughts and images. In his works, he goes from thought to image and from image to thought. The formation of the style was influenced by Mikhail Shemyakin, Giorgio de Chirico, Rene Magritte, Pavel Filonov.