The Russian Academy of Arts and the Krokin Gallery present the project of Vladimir Anzelm “Gigantomakhia”. The basis of the exposition will be completely new works specially created by the artist for the exhibition. This is a large-format painting in the author’s technique on burlap canvas and fabrics, made by coal, acrylic, sand, and installation. And also the author’s most famous sculptural objects from anthracite and resin. 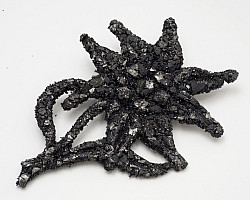 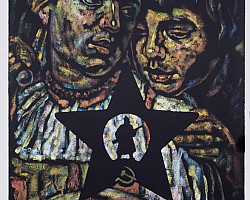 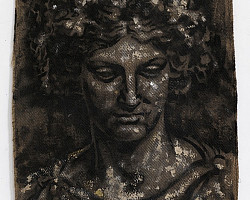 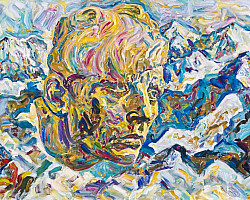 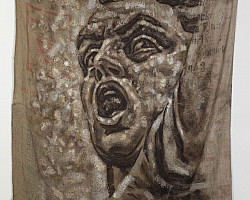 The art of Vladimir Anzelm, with all the variety of style, form and nuance of content, is unified in its goal-setting, and each subsequent exhibition becomes the next version of “recognition” and definition of the space of European culture that is mobile in its manifestations.

Interest in such studies is explained by the nature of things and is present at the genetic level. The historical antithesis of the Slavs and Germans in the person of Vladimir Anzelm takes on the form of a moving antinomy. The problem of identifying “friend or foe,” as applied to a person with a Russian name and a German surname, acquires special semantic meaning and burden, and the closed and largely self-sufficient poles of the two world cultures acquire a complex, almost syncretic unity. Hence the free circulation and synchronization of the two fundamental and traditional systems of Eurasia.

The dominant feature of the current appeal to the programmatic topic for the author is a well-balanced set of archetypes, formed within the framework of a single and fundamental attribute of European civilization, the idea of ​​it: we are talking about classicism.

The phenomenon of classicism turns out to be the main content of the exhibition and is revealed as an archetype and indispensable companion for overcoming world catastrophes, wars and revolutions, as an antithesis to chaos and the “sunset of Europe” that has become familiar.

The classicism of Vladimir Anzelm is by no means just a great style, it is a kind of matrix that migrates in time and space, activating and shaping the creative processes of "self-healing" in the harsh context of the historical catastrophe of European wars and revolutions.

In the paradigm of postmodern quotation, the author refers to the examples of European classics of the early 19th century: to the Marseillaise Rudot, idealizing the French Revolution, to Victoria Rauch, exalting the formation of Prussia, and to the anthology of Soviet classicism Chadr, heroizing the weapons of the proletariat.

Anselm defines the unchanging “style gene”, a landmark sample, an ideal sample inherent in the European concept of the Golden Age, a time of stability, proportionality and order. Hence the appeal to ancient Greece, hence the name of the exhibition "Gigantomakhia", the struggle of the ancient gods with immortal heroes.

Vladimir Anzelm was born in 1962 in Perm. From 1980 to 1985 studied at the Kazakh Pedagogical Institute (art and graphic faculty). Since 1999, he lived in the legendary Moscow squat “Baumanskaya 13”, together with Vladimir Dubosarsky, Valery Koshlyakov, Alexander Sigutin, Yuri Shabelnikov, Sergei Shekhovtsov. Currently lives and works in Berlin.