A wonderful organist (and BBC music commentator!) Alexander Maykapar shares his inspiration with grateful listeners. Music and the word are in the dual unity of a miracle.

He received his musical education at the Russian Academy of Music (in the class of piano prof. Theodor Gutman) and in the Moscow Conservatory (in the class of the organ of prof. Leonid Roizman). The musician began extensive concert activity in 1970 as a soloist - harpsichordist, organist and pianist. He performs in Russia and abroad (CIS countries, Poland, Germany, Austria, Belgium). Repeatedly participated in many European music festivals - in Berlin, Potsdam, Dresden, Schwerin, Vienna, Warsaw, Brussels, Charleroi, Budapest and many other cities. Alexander Maykapar, the only one in Russia and one of the very few musicians in Europe, performed in concerts and recorded on radio the Complete Collection of Harpsichord Works by I. S. Bach. Significant events in the musical life of Moscow were the festivals held by Alexander Maykapar in the Armory of the Moscow Kremlin. The first of them was dedicated to the arrival of Queen Elizabeth II of Great Britain in Russia (with the participation of the British Embassy, ​​the British Council and the patronage of the British Ambassador, Mr. Brian Fall). The second is “Masterpieces of music among the Kremlin’s masterpieces.” To date, London-based Olympia has released five CDs of Alexander Maykapar with recordings of ancient Russian music on the harpsichord, piano and ancient clavier from the collection of the Ostankino Palace of Counts Sheremetevs. Alexander Maykapar is authoritative an art historian, who owns more than 100 published works on the history of music, performing arts, musical iconography. In the translation of Alexander Maykapar, Wanda Landowska’s books On music ”(M., 1991), Erwin Bodka“ Interpretation of the Bach Clavier Works ”(M., 1993), Walter Emery“ The Bach Ornamentation ”(M., 1996). Alexander Maykapar has been working closely with the CROWN Publishing House recently. -PRESS. ”Here in the series“ Academy ”published his significant work in the field of iconography of Western Christian art“ New Testament in art ”(M., 1997). Earlier in this series was published“ Dictionary of Subjects and Symbols in Art ”by James Hall (M., 1996) in the translation of Alexander Maykapar - a reference recognized as a classic. Also, a new translation of Alexander Maykapar was published - the book of Henry W. Simon “100 Great Opera” with the addition of “Masterpieces of Russian Opera” written by Alexander Maykapar. 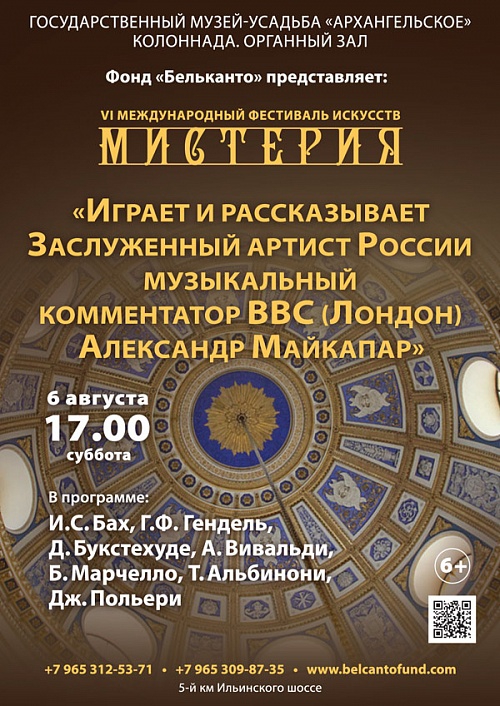