“Do not say that there is no God. Speak - I don’t have It ”(Nikolai Serbsky).

Lord why did you leave us?
Mister
This is against the rules (G. Sapgir, Psalms). 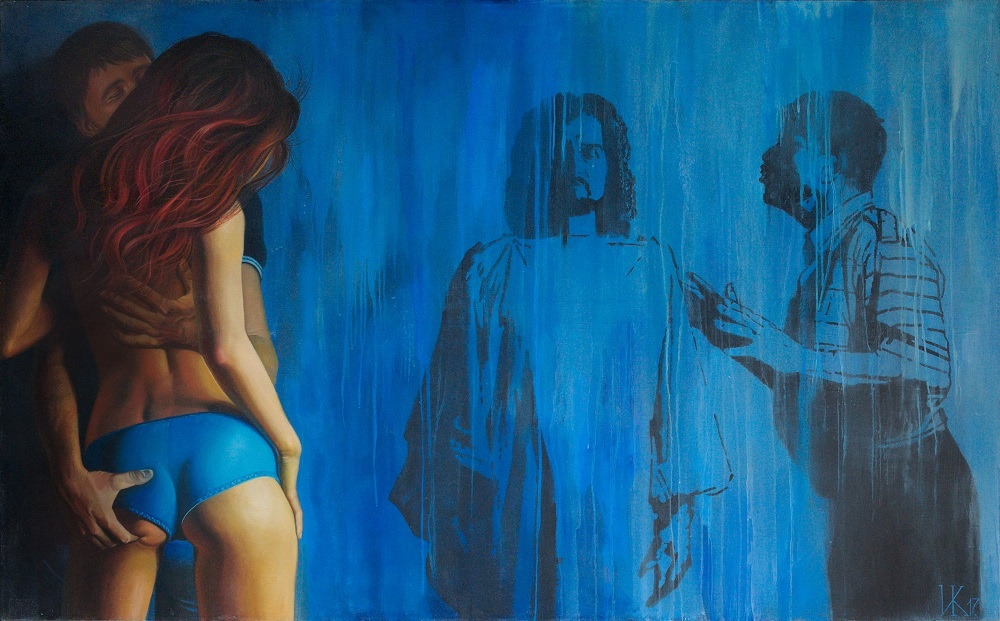 The project consists of nine paintings written in the traditional technique of three-layer painting, eight art objects made using the graffiti technique, and the installation “Wall”, which the artist will create directly in front of the audience..

So, in the project, two groups of works - paintings and objects, in both in the form of graffiti - drawings on the wall, the author depicted the main subjects of the "Passion of Christ". This is the Carrying of the Cross, Crucifixion, Flagellation, Position in the coffin, Ascension, Kiss of Judah. They are made in black outline, sometimes filled with white, they are paraphrases of classical works and, due to their incredible expressiveness, cause strong emotional feelings. There are two plans in the paintings. Against the background of graffiti, the artist depicts genre scenes from the life of a metropolis, and between these two plots existing in the plane of the same canvas, there is an irresistible chasm, a gaping parallelism. Here a young man is completely absorbed in his phone, all in virtual reality (the “Appendix”) and does not notice either what is depicted on the wall (this is the Position in the coffin), nor the bloody band on his forehead left by life reality. The little girl does not see the huge image of the Descent from the cross on the wall behind her - she is in reality an electronic toy in her phone (“Mainkraft”). Street guys - one in the hood sleeps, kneeling and leaning at the foot of the cross with the crucified Christ ("The Last Hero"), the other, still not completely disconnected from the world, noticed something on the wall, something flies up, and exclaims “Up,” as if it were not Christ’s ascension, but a flight of balloons. The long, naked legs of the girl leaning against the wall are adjacent to the image of the Flagellation of Christ (“The Scourge”).

Who are these characters of Ivan Korshunov? “Or are you mice? / Or miscarriages? / That you do not see the sun… / Or are you stuck in the ground / like snot? (Heinrich Sapgir. Psalms). The heroes of Korshunov are his contemporaries, as young as he is. All of them are united by something in common - piercing loneliness in the modern world of a big city. The artist sees the reason for this in the God-assignedness of his contemporary, while man himself deprived himself of divine grace and God left him. That is, this is not poor Job, temporarily abandoned by God, crying out to him, hungering for divine grace, this is an indifferent, devastated man who himself rejected this grace.

“Lord / lean your heavens / and come down / for at least half an hour” (Henry Sapgir. Psalms). In the context of his interpretation, Ivan Korshunov, as it seems to us, acts as a modern God-seeker, developing the tradition and ideas of Russian religious philosophy. “For many people, the divine image turned into just a picture on the wall. Despite many life circumstances, God is constantly present in the life of every person, and only free human will helps us to notice or not to notice it, ”says Ivan Korshunov. "There are leaves / there are birds / there is sky / and indeed there is / Judge of the whole living," the poet writes. (Psalms. G.S.).

There is a double meaning in the name of the project. On the one hand, this is a call to action, expressing the gospel love for one’s neighbor, grief at the last farewell, and on the other, it is a kiss of a traitor, a Judas kiss.