Tickets can be purchased on the website (pushkinmuseum.art) and at the box office of the museum (Volkhonka St., 12). The concert ticket also includes a passage to the Francis Bacon, Lucian Freud, and London School exhibition. Please note that on March 27 the museum exposition and temporary exhibitions are open until 20:00. Please take into account the museum’s working hours and recommend planning a visit to the exhibition before the concert. 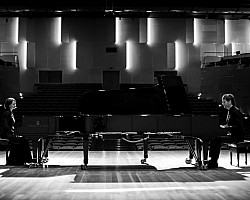 The concert "Mad songs" is dedicated to the popular in the second half of the XVII century the musical genre of mad songs ("crazy songs"). Interest in these works arose in connection with the emergence of a new brutal London entertainment — monitoring patients at the Mary Bethlehem Hospital, the London Hospital for the Mentally Ill (Bedlam). The Mad Songs program included songs from the heyday of the genre - songs by the brothers Henry Purcell and Daniel Purcell, Henry Laws, John Eccles - as well as the extremely expressive experience of addressing mad songs in the 20th century - “Eight Songs of the Mad King” (1969) by Sir Peter Maxwell Davis.

Year of the music of Great Britain and Russia 2019

The program of the Year of Music 2019 is based on the recognition of the rich cultural heritage and musical traditions of the UK and Russia and helps to strengthen ties between the peoples of the two countries.

At the heart of the Year of Music 2019 program is the principle of cultural diversity. The British music scene will be represented by both academic and contemporary trends. The wide audience is waiting for a diverse program of live performances and educational events, as well as special online projects.