Since February 6, 2019, the St. Petersburg State Theater Library has been inviting you to the Shakespeare World exhibition, dedicated to the 455th birthday of the English playwright. 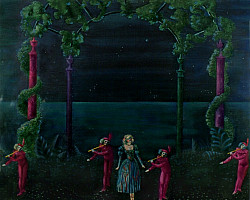 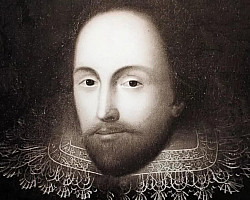 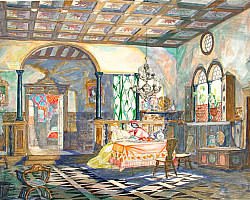 The stage embodiment of Shakespeare’s drama is a special page of theatrical history. For centuries, the plots of the English classic served as a source of inspiration for composers and choreographers, and the characters of his plays were the cherished dream of every artist. The fame of many stage masters is associated with the vivid embodiment of Shakespearean roles that remained in the memory of generations as wonderful legends, and the success of this embodiment depended to a large extent on the theater artist. Sketches of costumes, sketches of scenery, being the first stage of work on a play, over time turn into his memory, into one of the few material media that can restore its atmosphere.

In the sketch fund of the St. Petersburg State Theater Library, Shakespeare’s scenography is 1202 sheets, made both for musical theater (for opera and ballet), and for drama. Including 8 sheets created for a puppet show. Together, they illustrate more than 50 productions and make it possible to truly immerse yourself in the Shakespeare - the world of Shakespearean heroes.

The chronological beginning of the exhibition "Shakespeare’s World" are sketches of the late XIX century. to the opera by G. Verdi “Falstaff” of the company Ricordi (Milan). The exposition of the work of G.L. Telyakovskaya (wife of the last director of the Imperial theaters V.A. Telyakovsky) and one of the most famous scenographers of the Alexandrinsky and Mariinsky theaters of the early XX century. A.K. Shervashidze. The first post-October decade is represented by sketches by B.A. Almedingen to the opera by C. Gounod “Romeo and Juliet” (one of his best works) and the sets of MP Bobyshova to the play "Pacification of the Shrew." The Soviet era is reflected in the theatrical legend - the play "King Henry IV" in the design of E.S. Kochergin, expressive painting S.M. Yunovich and magnificent sketches of M.Ts. Azizyan for the comic ballet B.Ya. Eifman to the music of G. Donizetti "Twelfth Night." The exhibition ends with the search for scenographers of our time, represented by sketches of the first decade of the 21st century.