Van Gogh canvases are filled with music and light. The works of Vivaldi, Tchaikovsky and Piazzolla are rarely picturesque. The meeting of these geniuses was predetermined. How exactly? Come to the concert. 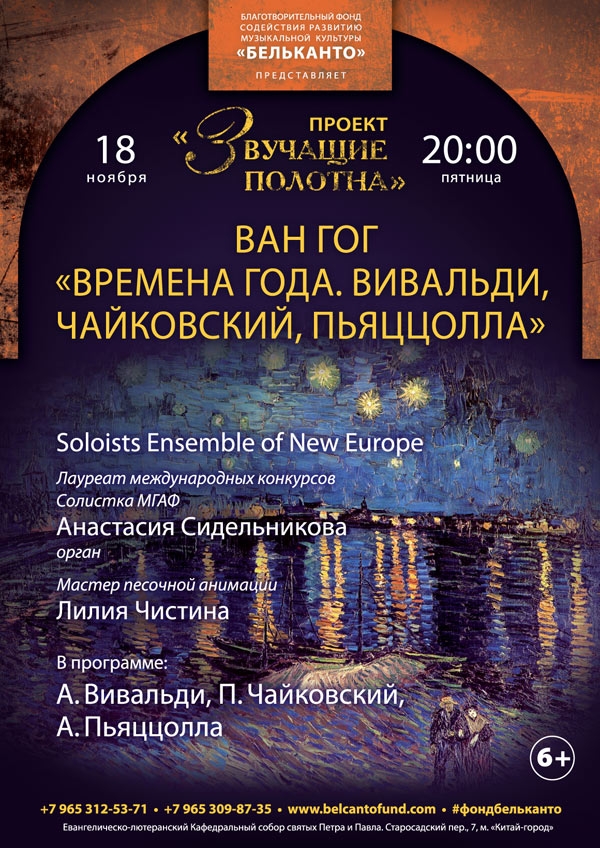 Van Gogh. The greatest of artists whose tragic fate is a reproach to humanity. And pride - at the same time. After all, the world created by Van Gogh expanded the horizons of reality, enriching it with an unprecedented fantasy. A strange manner of writing, so incomprehensible to contemporaries… a style plagued by a difficult life… recognition of one’s own immense power and, at the same time, understanding of its uselessness for those around us… All this is Van Gogh. An artist whose paintings were not sold during his lifetime. But they became invaluable after death. Time has put everything in its place. It is a pity that Van Gogh did not find his fame. However… who knows - did he need widespread fame? Creativity requires silence. And the music. Sound "Seasons" - Vivaldi, Tchaikovsky and Piazzolla. Masterpieces that incorporate the whole boundless range of shades of human life. And styles - because they were created in such different eras. Listen to the brilliant music of great composers. Take a look at the miracle created by the strange artist.

In the program: A. Vivaldi, P. Tchaikovsky, A. Piazzolla