Russian North - polyphony of images of nature and traditions

We invite you to the exhibition-forum of the artist Dmitry Gusev “The Northern Ark”, which will be held on November 3-19, 2017 from 11:00 to 18:00 at the address: 21/2 Tokmakov Lane, building 1 (Estate N. E. Struisky). The exhibition will feature paintings and drawings, lectures and dialogues about the Russian North, Siberia and the Old Believers, unique artifacts of the 17th-20th centuries, and traditional clothing of the indigenous peoples of the north. The event is supported by the Russian Orthodox Old Believer Church and the Oleg Krashevsky Foundation. 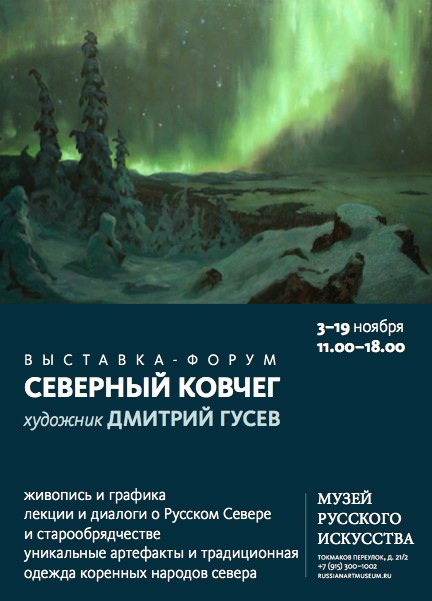 The painting exhibition "The Northern Ark" is dedicated to the way of life of the Old Believers and their values, ethnography and traditions of the indigenous peoples of the north. The theme of the Old Believers will open handwritten books and miniatures of the XVII - XX centuries, cast and painted icons, antique clothing. The theme of indigenous peoples can be introduced through the example of jewelry and costumes of the Dolgan and Nganasan peoples, silver belts, deer harness, mammoth bone items from the private collection of Oleg Krashevsky. The keynote of the exhibition will be the interaction of cultures on the basis of the general foundation of traditional ethics, the influence of the external environment and nature on the formation of the world outlook and attitude of the peoples of this region.

“The Russian North is multifaceted. This is a polyphony of images of nature and traditions, the beauty and harmony of which, it is impossible not to tell. But still, the main goal that I organize the exhibition is to pose the question - what is the traditional worldview of Russian culture and cultures of the peoples of the north? And how interaction based on traditional ethics contributed to the expansion of our state and its creation, ”says Dmitry Gusev.

The artist wrote large author’s cycles and a series of paintings and graphic works reflecting the greatness of these places. Landscapes full of primordial silence, portraits of local residents, sketches of the rarest ethnography, sketches and even travel notes, letters and impressions of Dmitry for many years formed the basis of his creative and research work, which became part of his life, largely influencing his mentality and moral and spiritual landmarks. In the space of interiors of the city estate of the XIX century, the artist’s work will transfer the viewer to the world of the Russian North and Siberia, full of beauty, harmony and severe calm.

The Northern Ark exhibition will host a series of educational events and events. As planned by the authors, it will become an open platform for lectures and discussions, and will provide an opportunity to talk about the traditions and life of the Old Believers and the indigenous peoples of the North, their relationships and history.

The main theme of the exhibition-forum will be the need to preserve cultural identity as the basis for harmonious interaction between different ethnic groups, peoples, religious groups, as well as the development of human rights activities in the field of nature conservation. Within the framework of the project, such specialists and public figures as Valery Korovin, Alexey Muraviev, Dmitry Urushev, Alexandra Barkova and others will perform.

One of the main speakers - Oleg Krashevsky, a researcher, collector of antiquities of Taimyr and a philanthropist, will give lectures: “Putorana Plateau, the edge of waterfalls and northern lights”, “Shamanism in the culture of the Taimyr peoples”, “Nganasan people - history, life, traditions”.