The Stroganovs. The era in icon images

On August 1, 2020 in the Perm Art Gallery a new exhibition “The Stroganovs. The era in icon images ”. The exposition presents works of decorative and applied art and icons of the 16th-17th centuries, marked by the inscribed inscriptions of the Stroganovs. 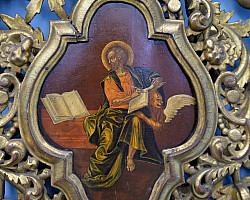 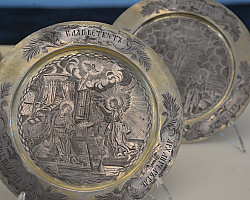 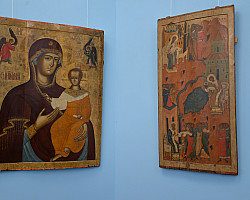 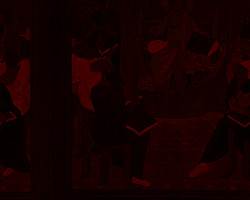 For the first time, the gallery displays a number of works - this became possible thanks to a complex restoration. For example, these are icons made by the masters of the Moscow Armory Chamber of the 17th century, which were once in the iconostasis of the Church of the Praise of the Virgin of the Eagle-town and the Annunciation Church in Solvychegodsk.

The Stroganov family is associated with the history of the Kama region by many events, starting from the 16th century. Merchants and salt producers from Vychegodskaya Salt, they received from Ivan the Terrible in 1558 land along the Kama River. Later, lands along the rivers Chusovaya, Sylva, Ocher, Yayve were added to their estates. In return, the Stroganovs pledged to build fortified towns, keep warriors, look for ore and smelt metal, develop salt production and agriculture. Representatives of this family were characterized by the desire to combine their own well-being with the interests of the state, to be at the level of achievements not only in industry, but also in culture. They collected the richest libraries; icons painted by the best icon painters and cult objects made by first-class craftsmen filled the churches in their estates

"Stroganov" icons - usually small in size, virtuoso, almost gem-quality in the subtlety of writing - belong to the end of the 16th-first third of the 17th centuries, and were made by the capital’s "sovereign icon painters" for churches in Solvychegodsk and Orel-Gorodok. In the inscriptions on the backs of the icons, representatives of the Stroganov family are mentioned. Other icons in the manner of execution are marked with inset inscriptions - large in size and monumental in images. The Stroganovs appreciated ancient icons, ordered both repetitions of ancient images and new icons made in the old manner.

The Church of the Praise of the Virgin in Orel-Gorodok, founded in 1564, became the focus of masterpieces of art on the Perm land. It was from here that the best works of Old Russian art of the 16th – 17th centuries came to the collection of the Perm Art Gallery. Among the rarities - the icon of the Mother of God of Smolensk, painted before 1577 - the earliest among the contributions ("deliveries") of the Stroganovs to the Perm churches. This icon is made in the image of the miraculous icon of the 15th century, and was revered, among other things, as an assistant in military affairs, which was necessary for the Stroganovs during their consolidation on the Perm lands. Another masterpiece is the Mother of God of Vladimir with the stories of the legend about Temir-Aksak, written by order of Nikita Grigorievich Stroganov in the 1580s.

In addition to icons, silver items decorated with engraving and gilding for the liturgy (chalice, diskos, plates) made in the capital’s workshops, as well as by artisans of the Stroganov estates will be shown. A great rarity is the Gospel of 1603 from the Perm collection, on the first leaves of which the inscription is made: “In the summer of 7111 August on the 16th day this book is the altar-table gospel of the house church of the World Exaltation of the honest and life-giving cross of the Lord in the city on the Estuary on the Orel on the Kama River on the Estuary of the Yayva River the position of Nikita Grigoriev, son of Stroganov, in his fiefdom for his healthy remembrance and for his parents for the repose ”.

The upper cover of the gospel is made of silver, decorated with relief images of the evangelists. The displayed exhibits also acquaint with the traditional techniques of jewelry (filigree enamel, engraving, punching, etc.) of the 17th century. At the exhibition you can also see examples of the famous Stroganov facial sewing.

Located in the altar part, the exhibition creates a symbolic link between the early stages of the Stroganov era and the present day: the building of the Transfiguration Cathedral occupied by the gallery was built using materials from the Pyskor monastery, the largest in the Kama region, founded by the Stroganovs in the 16th century. The famous Perm iconostasis comes from the same Pyskorsky monastery.