The British Council opens the 2019 exhibition season with a presentation of the work of SWAP participants: UK / UKRAINE. Nine artists and one curator participated in art residences in Ukraine and the UK in 2018. They will show the results of their visual research at the Museum of Modern Art of Odessa from February 22 to March 31. 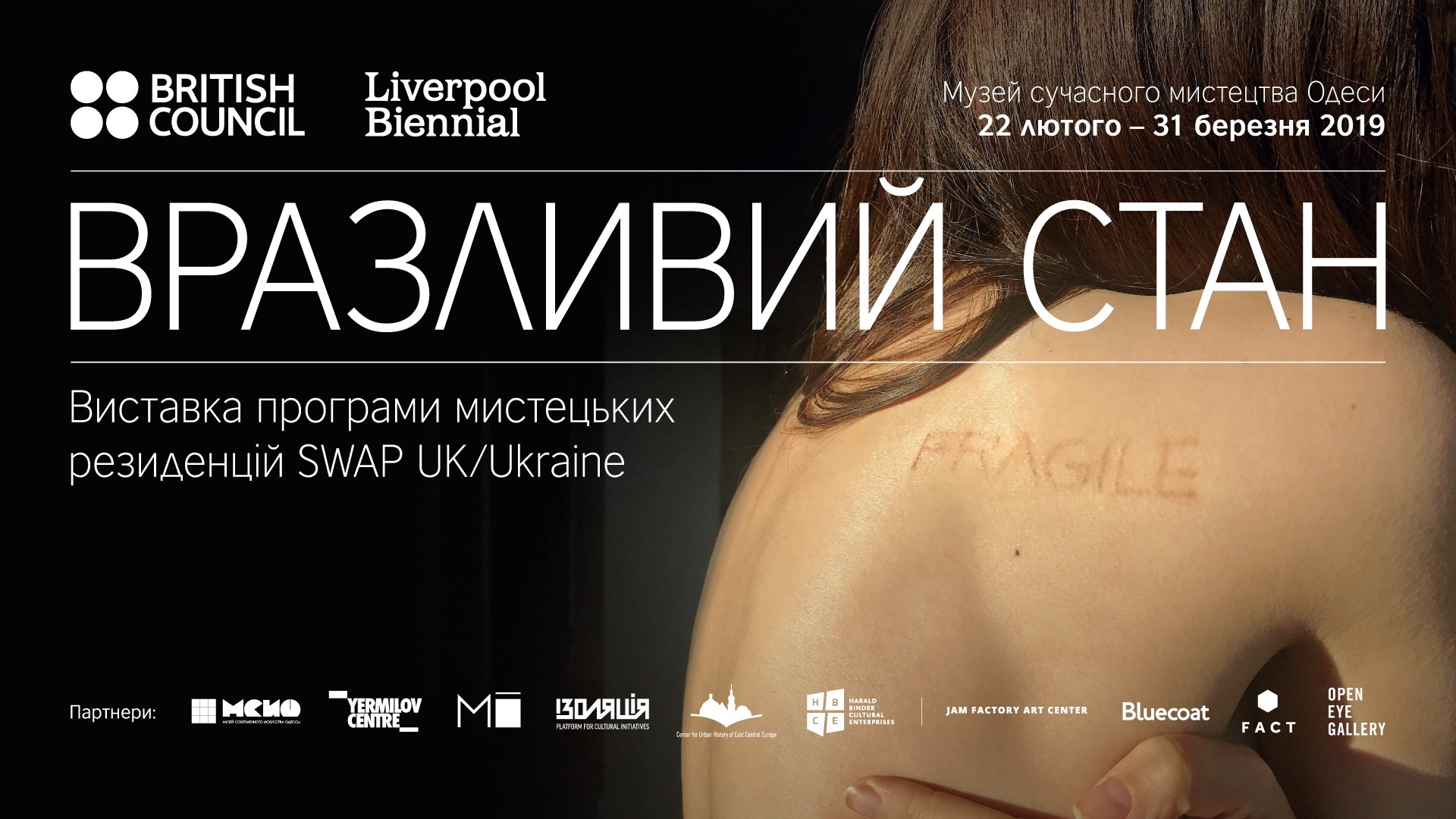 This year the final exhibition of the project will be held in Odessa, and this is no accident. Odessa is the sister city of Liverpool, which hosts one of the largest and most influential exhibitions of contemporary art in the United Kingdom - the Liverpool Biennale. It was under the supervision of the Biennale team that residences were held for Ukrainian participants in the project in Liverpool. The final exhibition of the international project SWAP: UK / UKRAINE in Odessa aims to enhance the role of the city in the international cultural dialogue, stimulating the development of the local cultural landscape and supporting the ideas of decentralization.

The curators of the final exhibition, Ilya Zabolotny (British Council) and Lina Romanuha (IZOLYATSIA fund), note: “Having started preparing for the final exhibition, we immediately noticed that all participants of the residences in their works to some extent appeal to the state of vulnerability, uncertainty, anxious expectation of change. The amplitude of these experiences covers both individual bodily experience, emotions, hidden trauma, and global geopolitical challenges: militarization, demarcation, the crisis of established social paradigms. The exhibition will feature a wide range of expressive means chosen by artists in their works: video installations, sound compositions, graphic works, texts, objects, photographs. Some used their own body for artistic reflections, while others even had to create a model of the tank. "

“Global cross-cultural communication, which is created through artistic residences, is an important component of international dialogue. Cooperation between countries as diverse as the United Kingdom and Ukraine becomes the basis for very interesting reflections and innovations in culture in general and in contemporary visual art in particular, ”commented Semyon Kantor, director of the Odessa Museum of Modern Art.

“For the third year in a row, thanks to fruitful cooperation with our partners in the UK and Ukraine, we have been able to create a unique kaleidoscope of active mutual influences, exchanges and cooperation between the cultural environments of the two countries. In our opinion, artistic research, reflections and the demonstration by artistic means of the ability for friendly dialogue and mutual understanding between people are extremely important in our time of active socio-political changes, ”- Simon Williams, Director of the British Council in Ukraine.

SWAP: UK / Ukraine - an annual program of British Council residences in Ukraine for artists and curators. The program is implemented in collaboration with the Liverpool Biennale, the largest festival of contemporary art in the United Kingdom, and the most innovative and experimental art institutions in Ukraine. Since the launch of the program in 2016, 30 residences (27 for artists and 3 for curators) have been held in Liverpool, Kiev, Kharkov, Lviv, Odessa, Muzych, Uzhgorod and the Biryuchiy Peninsula in the Sea of ​​Azov. SWAP aims to bring together artists from both countries and support their development in an international environment. The program also provides artists with time to research, reflect and study the artistic traditions of the UK and Ukraine.

Anna Kahiani (born 1991, Kovel) lives and works in Kiev. She received a master’s degree in marketing and advertising (2013) from Kiev National University of Trade and Economics. Since 2015, she has been participating in the Studio Visit and New Art School: Liquid City art programs from the Cultural Project, the Pravda / Prospect theater group; graduated from the Artist course at Kyiv Academy of Media Arts (2016). In her projects, Anna focuses on her own experience and experiences, using various media: installations, video works, films. It touches on the topics of psychological states, memory and physicality, transformation of one’s perception of a public or other space. Anna was at the residence in Liverpool during November-December 2018. https://youtu.be/GoM6afPKJpM

Nikolai Karabinovich (born 1988, Odessa) lives and works in Kiev and Odessa. In 2011, he graduated from the Philosophy Department of Odessa I.I. Mechnikov National University and as an artist he works with video, text, sound and performative practices. In his practice he appeals to the categories of place and time. Karabinovich’s significant interest is in the “changing identities” of post-socialist Eastern Europe, in clashes between new nationalist movements and contradictions in historical narratives. Another important area of ​​his work is working with the music archive as a universally understandable resource for exploring changes in the political, historical and social context of our time. Nikolai was at the residence in Liverpool during November-December 2018. https://youtu.be/yknZcDMr2yU

Victoria Mironyuk (born 1985, Kolomyia) is an interdisciplinary artist who is involved in, among other things, performances and theater. She received a master’s degree in cultural theory at NaUKMA (Kiev), a master’s in the practice of performing arts and visual culture (Madrid), and completed a graduate program in research on performance and scenography (Brussels). Victoria works on projects at the intersection of performative and visual art practices that explore the problems of ritual structures, their boundaries and capabilities. Victoria was at the residence in Liverpool during November-December 2018. https://youtu.be/_C5Sl43ywWk

Lina Romanukha (1985, Rivne) - art manager and curator, received a master’s degree in cultural studies at NaUKMA. She worked in various art institutes, including the Center for Theater Arts. Les Kurbas, Karas Gallery, PinchukArtCentre. After his residence in the Delfina Foundation (London, UK) he works in the IZOLYATSIA. Platform for Cultural Initiatives ”by the project manager, and also oversees the Art Environment project and the International Residences Program. Lina was at the residence in Liverpool during November-December 2018. https://youtu.be/vnlikRj8PY4

Artists from the UK

Dana Venice (born 1983, Jerusalem) is an artist from London. She received a bachelor’s degree in art and interdisciplinary research at Tel Aviv University and a master’s degree in art from the Royal College of Art (London). Dana predominantly creates films in which she emphasizes the fluid line between fiction and documentary. Showing the intimacy and vulnerability of life through the stories of displaced people, the artist comprehends her own identity and a sense of cultural or national identity. Dana was at the residence in Lviv in the art factory Factory Jam during September-October 2018. https://youtu.be/mAfN-_UglZQ

Helen Flanegan (above 1988, Birmingham) is an artist who lives and works between Birmingham (Great Britain) and Rotterdam (Netherlands). Helen earned a master’s degree at AKV St. Joost (Netherlands) and a bachelor’s degree at Falmouth University College (UK). The artist combines real events with fictional scenes, on the basis of which she creates video, sound and installations. Through designing and writing scripts, often using the category of absurdity, Helen seeks to explore the social structures and political significance of everyday life, focusing on emotions, work, physicality and hidden trauma. Helen was at the residence in Kiev in the IZOLYATSIA foundation during November-December 2018. https://youtu.be/UGhI1BKTK4o

Jaimini Patel (born 1974, London) is a London-based artist who received a bachelor’s degree from the University of Leeds, a master’s degree from the Slade School of Fine Art (University College London) and defended her doctoral dissertation at the Ruskin School of Art (Oxford). In his practice, Jaimini explores the essence and possibilities of matter through the study of boundaries, systems and performative actions. Jaimini was at the residence in Kharkov in the Ermilov Center during August-September 2018.

Martim Ramos (born 1983, Lisbon) is a London-based artist. Works primarily with photography and creates films. Martim earned a bachelor’s degree in art history and recently completed a photography course at Royal College of Art in London. In his practice, the artist addresses the themes of memory, trauma and representation. He uses several sources, such as found images and objects, literature, photographs and films, as well as methods of appropriation and interference, to work at the intersection of documentary and fictional. Martim was at the residence in Lviv in the Center for Urban History of Central and Eastern Europe during September-October 2018. https://youtu.be/dXqYXCpVU28

Riccardo Matlacas ( born 1982, Naples) is a multidisciplinary artist working with various forms of art, in particular with performance, dance, painting and sculpture. He graduated from the Academy of Fine Arts in Naples in the direction of "Sculpture" and received a master’s degree in Social Sculpture at the University of Oxford Brooks. Seeking a human being outside races and customs, it creates cathartic actions and performances aimed at current political, environmental and spiritual problems. The artist preserves objects created during performances as objects of memory and thought. Riccardo was at a residence in Kharkov in the Kharkov Municipal Gallery. https://youtu.be/7kDXwTuvdMI

Susanna Stark (born 1988, Dundee) - lives and works in Glasgow. Received a master’s degree in print graphics from Royal College of Art, London. Suzanne’s work is a long study of the voice of women, its historical and modern visibility in public space. Working with voice, song and sound, print and digital media, the artist combines economic, cultural, spiritual and personal in a story about the contradictions of modern life. Suzanne was at the residence in Odessa at the Odessa Museum of Modern Art during October-November 2018.