August 4 at 16:00 in the Kaluga Museum of Fine Arts (Lenin St., 103) will open the exhibition of the philatelic collection of Stanislav Nikolayevich Stepanov "Exhibition of postage stamps of Russia, the USSR and foreign postage stamps" ANNIVERSARY OF OCTOBER ". To the 100th anniversary of the Great October Socialist Revolution of 1917. " 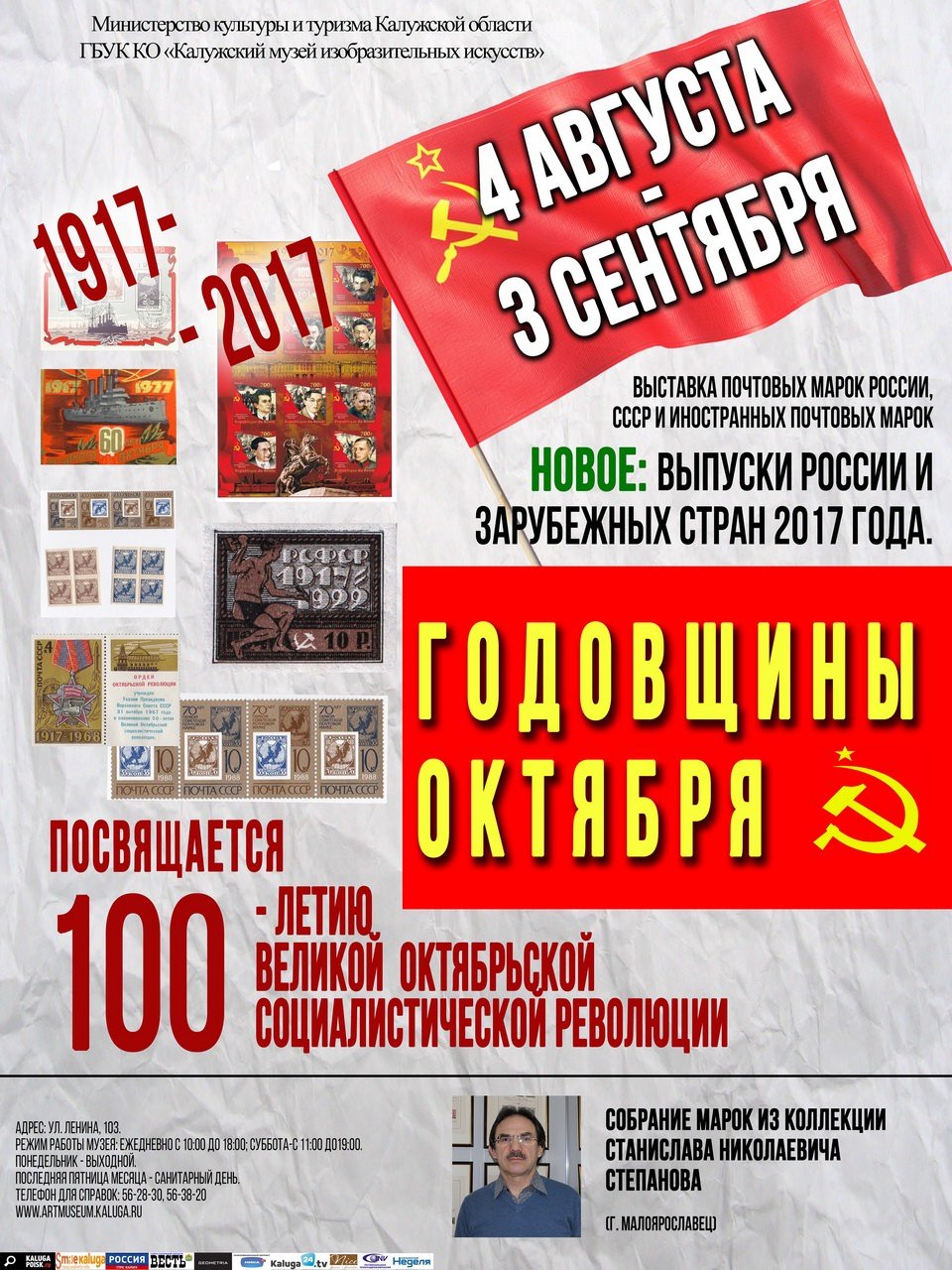 One can have a different attitude to the 100th anniversary of the October Revolution, but one cannot but admire the art of artists who managed to translate in graphic miniature what a postage stamp is, an image that carries the idea of ​​the main holiday of the country. Outstanding Soviet and foreign artists worked in this type of art - in small form graphics, which include postage stamps.

Collector S. N. Stepanov provided his collection of postal miniatures dedicated to the “Anniversaries of the October Revolution” to the 100th anniversary of the October Revolution for exhibiting at the museum. The exhibition’s exposition included 176 brands and blocks published before 1991, and about 100 brands, the anniversary, 2017. The collection of S. N. Stepanov includes rare and valuable instances of stamps. You can see stamps in the exhibition, sponsored by such famous Soviet artists as R. G. Zarins (1869-1939), who became the author of the first postage stamp “Liberated Russia” or “Hand with a sword, cutting a chain”, executed according to his sketch in 1918. Also presented are stamps of the Honored Art Worker of the RSFSR, the main artist of Goznak I.I. Dubasov (1897 - 1988), who created more than 150 postage stamps for various subjects. According to his sketch, one of the most famous brands, dedicated to the 5th anniversary of the October Revolution, was executed. The brands of other graphic artists of Goznak V.V. Zavyalov (1906 - 1972), Yu. Levinovsky and others are also displayed here.

The exhibition presents not only stamps published by the USSR Post, but also the postal departments of friendly states. After the Second World War, in the 1950s - 1980s, all the formed people’s, democratic, socialist republics considered it their duty to issue stamps dedicated to the Great October Socialist Revolution. Of great interest are stamps issued in Hungary, Bulgaria, Poland, Romania, Czechoslovakia, Yugoslavia, the People’s Republic of China, the People’s Socialist Republic of Albania, and Cuba.

The exhibits of this exhibition will be interesting not only to admirers of Russian history, but also to art lovers, as they represent the work of famous graphic artists.

The exhibition will run from August 4 to September 3, 2017 at the premises of the Information and Educational and Exhibition Center of the KIIA (103 Lenin St.).