October 30 at 16-00 in the Information, educational and exhibition center of the Kaluga Museum of Fine Arts (Lenin, 103) the grand opening of the exhibition will be held Georgy Misakovich Tovmasyan. Painting. (1936–2011) 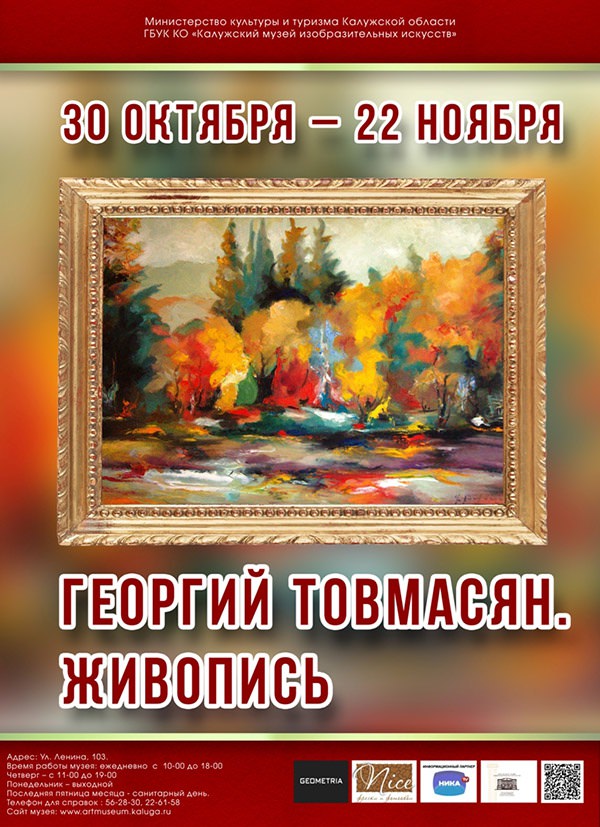 Georgy Misakovich Tovmasyan is an outstanding Armenian landscape painter. Born in 1936 in the village of Sadakhlo, Georgian SSR.

George was the second child of five children of a large family. Father - Misak Tovmasyan worked at the railway station. Mother Araxia was a weaver. Both parents of George come from Western Armenia. During the 1915 genocide, they fled to the Russian Empire.

In the years of study, along with obtaining general educational knowledge, the young man is seriously engaged in the visual arts.

In 1957 he entered the Moscow Art Institute of V.I. Surikov (now the Moscow State Art Institute named after V.I. Surikov) and fell into the class of A.M. Gritsay. During the student years, the first paintings of the master appear, with an elegant predominance of green shades or “The Green Period of Creativity”.

After graduation, in 1963, George returned home to Kirovakan.

In 1966, he began to teach drawing at the construction faculty of the Kirovakan branch of the Yerevan Polytechnic Institute. The first solo exhibition was held in Kirovakan (25 works).

In 1969, George began to teach theory and methodology of fine art at the Kirovakan Pedagogical Institute.

In 1972, George participated in the All-Union Exhibition "USSR - My Homeland" in the Moscow Central Exhibition Hall, in the republican exhibition "Glory to Labor", dedicated to the 25th Congress of the CPSU.

In 1976, the artist was admitted to the Union of Artists of the USSR. In 1982, he was elected assistant professor of the department. In 1985, he painted a portrait of the Catholicos of All Armenians Vazgen I, which is now kept in the funds of Etchmiadzin (the residence of the Armenian Apostolic Church).

He left an impressive collection (more than 400 paintings), located with the artist’s relatives and collected in the George Tovmasyan Foundation.

The exhibition will run until November 22.