Exhibition "The Art of Being Near"

The second greenhouse building, the Grand Palace (in the exhibition "The Art of the Great Style" and the hall of the educational project Arzamas), Bread House

On March 15, the Tsaritsyno Museum-Reserve opens the Art of Being Near exhibition, a continuation of the Art of Being project, initiated in 2018 by the NCCA and the Gulfstream Charitable Foundation for Helping Critically Ill People within the framework of the Contemporary Art and Special Perception program. 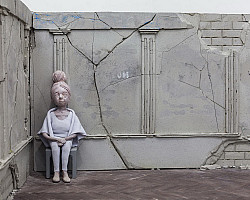 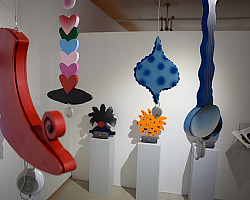 From 2019 to 2021, the project is being implemented by the winner of the Museum 4.0 competition of the Museum Without Borders charity program of the Vladimir Potanin Charitable Foundation.

From the very beginning, the project was built at the intersection of contemporary art, psychology, social rehabilitation, pedagogy and art therapy. Exhibitions of the “Art of Being” project in 2019–2020 were held in Moscow, Nizhny Novgorod, Vladikavkaz, Vyksa and Krasnodar. Each exhibition featured tactile and sound installations, interactive art objects, community art projects that emerged as a result of an open art competition. The criteria that guided the jury in the selection of works are as follows: openness and accessibility for perception by a person, regardless of gender, age and health status (including people with special needs or disabilities). The exhibitions are aimed at a wide audience, and the project is conceived as a program that brings together visitors with different needs.

Each exhibition is based on the principle of participation, which implies active involvement of the public in a dialogue with a work of art and with each other. In 2020, The Art of Being became a laureate of the Innovation Prize.

“Art itself has tremendous rehabilitating power. I am glad that two years ago we decided on such a large-scale art project and made an exhibition that travels around the country and proves the availability of art to everyone, without exception. Now we have a place where dialogue between different groups of people is possible, and modern art objects created by artists specifically for this project give an impetus for its continuation. "

“The Art of Being project is aimed at removing barriers in the perception of contemporary art, at building a dialogue not only with people with disabilities, but with a wide audience. We cultivate an active position, providing an opportunity for both artists and spectators to become accomplices in the cultural process. "

Nadezhda Gura , curator of the project:

“Our project works like a research laboratory. We collect and analyze feedback from viewers, colleagues, and participants with sincere interest. It is very important for us to see a lively emotional response, because the Art of Being project is a developing and self-adjusting system. In 2020–2021, we are holding the second cycle of competitions and exhibitions, this time in the regions of Russia. During the first year of the project’s existence, we have developed a number of techniques and will be happy to share our ideas with colleagues. We hope that we have managed to collect new material for the development of our research and take another step towards the dissemination of inclusive culture. "

Contemporary Russian artists participate in all exhibitions of the Art to Be project. In "Tsaritsyno" 14 works of art will be shown, four of which were created especially for this museum:

Moscow artist Alexander Obrazumov will present at the exhibition the art object "I Heard You" - a six-meter wall panel made of mirror acrylic with a phrase on duty, which is often substituted for a more accurate answer. The work is devoted to the paradoxical crisis of communications that we observe today: despite the constantly improving methods of transmitting information, we hear, but more and more often do not fully understand the interlocutor.

Petersburg artist Alexander Morozov - the author of the sound sculpture "Barricades of Silence", designed in the form of an exposed Gothic window, explores the acoustics of "Gothic fantasies". Together with Boris Shershenkov and Igor Vyazanichev, he collected a collection of noises: acoustic resonances associated with the peculiarities of architectural acoustics; spatial noises and the call of crows, which convey the character of the place where Tsaritsyno was built two and a half centuries ago.

Using the contact copying method used in archeology, the sculptor Mayana Nasybullova created an interactive installation "Plane Shift". This is a series of casts copying the decor of the Tsaritsyn palaces. With their help, the sculptural elements created by the architects who built Tsaritsyno can not only be seen up close, but also touched.

And in the miniature gallery FUTUROminor of Ivan Sery, which is an exact copy of the space in Nizhny Novgorod, an exhibition of Ekaterina Gerasimenko will open. The Moscow artist creates ceramic museum fences, but they become not just service elements separating the work of art from the viewer, but independent exhibits. “Museum Fences” encourage the viewer to think about what simulates our perception of gallery spaces.

Within the framework of the exhibition "The Art of Being Nearby", the "School of Art Mediators" will take place in the Tsaritsyno Museum-Reserve, and a parallel program will be organized. The round table will be devoted to media technologies in inclusion. Everyone will be able to join the discussion with the creators of the film "Tactics in / Place". During the “sonic walk” with Alexander Morozov, its participants will get acquainted with the basics of acoustic ecology by trying the “ear cleaning” exercises. The artists will conduct a series of master classes for children.