The new project of Ivan Korshunov sends us on a trip to the country of childhood. On the canvases are portraits of things - attributes of the world of the child. A gilded background emphasizes the significance, the symbolism of these things - icons from childhood. I. Korshunov about his project: “The project considers the processes that influence the formation of the child’s personality, exploring the cultural codes embedded deep within every adult, familiar to everyone from an early age. With the development of social networks, it becomes clear that the picture of childhood is perceived by most people equally. Despite the social inequality and various professional and national differences in modern man, when meeting with one or another cultural code from childhood - whether it is a game beloved by everyone, a cartoon character or a famous song - an element of recognition is triggered. Moreover, not only the object itself is recognized, but also feelings or memories associated with it. In most cases, having stumbled on the Internet on a photo of a funny little thing from childhood, people ask each other a question - but remember how it was? “Such questions reveal a lot of invisible connections in completely unfamiliar people and are able to unite a rather large number of adults and children around any sentimental memory.” 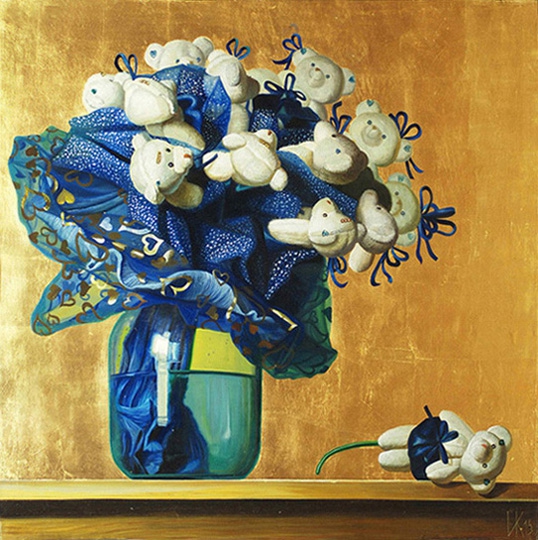 Korshunov’s artistic statement is based on a figurative image of the interpenetration of the children’s and adult worlds. Favorite teddy bear (the picture "Bear") has two different eyes, as in one inserted the eyepiece of the video camera watching the child. Korshunov’s innocent, cute toy becomes a symbol of total control of the adult world, in which the child already lives. A bunch of colored plastic keys ("Keys") is not just a toy for the little ones, it is an image of programming children’s consciousness. On the keys, the signs of different religious denominations, which the baby chooses, are usually determined by the family or the cultural environment surrounding the child. The image of the search for a life path, which begins already in childhood, carries a toy house with many doors ("Dom"), for each you need to choose your own key. The painting Fantasy, which depicts an antique vase with a bunch of candy wrappers, has a double meaning. For children, this is a gamble in candy wrappers, and for an adult, candy wrappers are tinsel of false values, a depreciation of traditions. Where the babies come from? Of course, they are found in cabbage. This is reported by a large head of cabbage with a baby diaper inside, depicted on a ceremonial gold background. Often we want to repeat or extend the happy moments of life, fulfill childhood wishes, experiencing the pure delight of the child. A bouquet of toy bears in a jar of water ("Bouquet"), symbolizes the absurdity, naivety of such desires. A composition with old darkened newspapers (Hot News) recalls the rapid variability of life. The fact that yesterday was super important today is just rubbish. 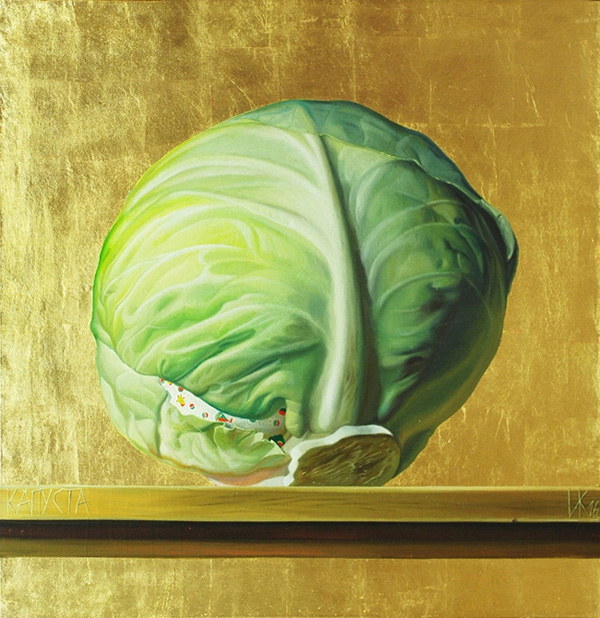 Nine new paintings by Ivan Korshunov again immerse us in the space of magnificent painting. The artist, as before, uses the ancient three-layer writing technique. The author is sure that this method is most organically combined with the philosophy of his work. And if it’s not given to us to experience children’s joys again, then it’s quite affordable to get joy from meeting with the beautiful. Irina Filatova With the information support of Sergey Shilin and the Russian News Federal Portal Photos of works can be downloaded here. Contacts for inquiries: +7 (499) 251-76-49 Gallery curator Irina Filatova: +7 (916) 617-73-74 Gallery Director Marina Obraztsova: +7 (903) 798-81-62 Email: pr@galleryfineart.ru If you do not want to receive news from the Fine Art Gallery, reply to this letter: "Please remove me from the mailing list."