An exhibition project is opening in the halls of the Museum and Exhibition Complex of the Russian Academy of Arts, dedicated to the release of the first issue of the legendary publication - the Crocodile magazine. The exposition presents more than three thousand reprints of the covers of issues published from August 1922 to February 2000.

The project is dedicated to the 100th anniversary of the most popular satirical magazine in our country, which will be celebrated on August 27, 2022. "Crocodile" is a phenomenon unique in its nature, and there is no similar analogue in the field of literary and artistic culture and journalism of the satirical genre. Suffice it to say that the circulation of the publication reached 6 million copies.

Over the 78 years of the journal’s existence, tens of thousands of the most relevant, acute social cartoons have been published, showing the shortcomings and vices of reality; all of them aroused the keen interest of the citizens of our country. These were topical satirical drawings on international political topics, as well as cartoons in the genre of everyday humor, reflecting the life of the country, including the years of the struggle against the interventionists, the civil war, industrialization and collectivization, Stalinist repressions, the hard times of the Great Patriotic War, periods of stagnation, perestroika and modern history.. 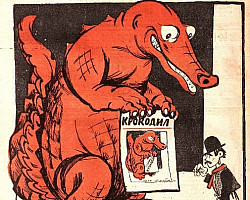 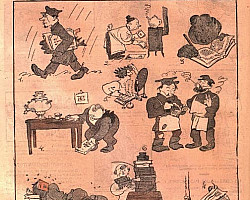