Exhibition "Masha Schmidt. Only the sky is higher"

Exhibition “Masha Schmidt. Only the sky above ”will be held at the ARTSTORY gallery from November 18, 2021 to January 16, 2022. The project actually acquaints the Russian viewer with the work of the artist Masha Schmidt, who graduated from the Stroganov Academy in Moscow, left for Paris in the early 1990s, continued her study of art in the Paris Academy of Arts and the Sorbonne, and already in France she became a professional painter. The exhibition will include both Schmidt’s paintings and a specially created site-specific monumental installation that will once again transform the ever-changing space of the ARTSTORY gallery. 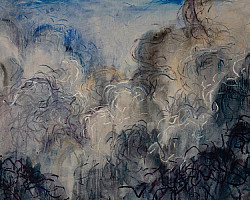 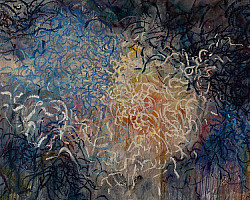 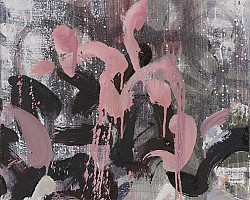 The name of the project was given by the series "Sky is the limit". This cycle is a continuation of the study of landscape in the broadest sense of the word; the artist has been working on it for many years. Previous series - "Through the Water", "Like a Long Echo", "Aurea pluvia" and the cycle "Phenomena and States of Things" presented at the exhibition - offered a kind of immersion in various spaces. They were devoted to such "elusive" phenomena as the movement of water, the play of light through the branches of trees, vibrations in nature. The current space with attempts to capture the vibrations of the wind and water jets, images of a garden, a leaf, a molecule, a memory…

The project "Sky is the limit" is being developed as a monumental series of landscapes in the air, where works coexist together, revealing and flowing into each other. The artist sees this cycle as a detachment from the ground, an attempt to "expand the framework" by pictorial means, to go beyond the canvas. In the modern world, where a person is forced to split his life into fragments, increases the speed of perception to the point of impossibility, “swallows” more and more information, looking at the sky provides an opportunity to stop for a while, dissolve in more, take a breath and… take off.

Masha Schmidt: “For me,“ Sky is the limit ”is a window to the sky, an opportunity to focus on the timeless, stop fussing, try to get off the ground a little. It is hoped that people will be able to stop for more than a second in front of the canvas. I am writing to give us back time and… breath. "

And art critic Anna Chudetskaya recalls the childhood sensation “when you lie in the grass and mindlessly look at the sky. It is rapidly approaching, and you yourself are flying upward. In painting, the feelings of childhood and the experience gained over many years of experimentation are combined. The gaze passes the thickness of the air and begins to distinguish the configurations of colored cloud energies. You begin to understand that this special space is a kind of repository that absorbs information about what has happened and is happening, about each and every one of us. "

Masha Schmidt’s language is surprisingly plastic, and we can say that she feels natural in the most diverse elements of the visual. She easily passes within the framework of a single series from painting to graphics, she works for theater and cinema. By the way, even in the process of studying at Stroganovka, the artist collaborated with the Mossovet Theater, in France - with the Comedie Francaise and Opera, and already in the current decade has been actively working as an independent set designer with leading Swiss theater companies and makes sketches and sets for films. She participates in exhibitions, in artistic and social practices, writes screenplays, teaches painting techniques at the Meudon Academy of Arts. For almost ten years he has been leading a unique cycle of classes for children and adults according to his author’s program, being an art expert at the London Gates international educational center.Makes monumental murals and installations for church buildings, hospitals and public spaces.

Within the framework of the project, on November 18, a public talk will take place on the topic "Why is it important for adults and children to look at the sky" with the participation of Masha Schmidt.