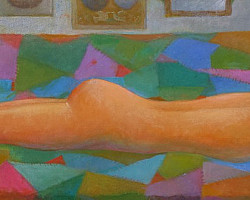 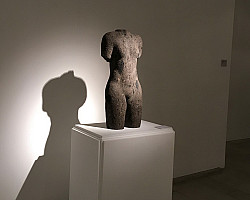 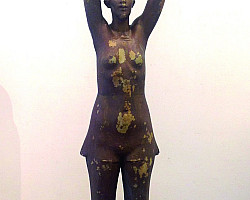 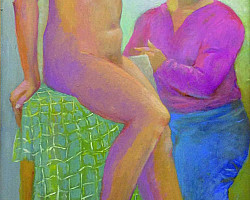 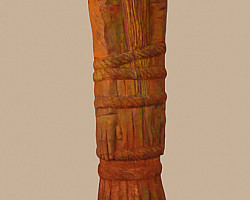 The composition of the exhibition, representing a variety of creative interests and the unique talent of the master, includes more than 70 works by the author created in recent years.

The sculptor, painter, writer, poet, researcher of the monuments of Russian literature is the hypostasis of the personality of Vladimir Buinachev, who has devoted more than 60 years to the art of sculpture. In 1967 he graduated from the Moscow Higher Art and Industrial School named after S. G. Stroganov, the workshop of Gabriel Schulz. The creative method of V. Buinachev is based on the classical school of Stroganovka, the works of Henry Moore and Marino Marini. In addition, the art of Dmitry Tsaplin, a self-taught sculptor who was sent to study abroad on the initiative of the People’s Commissar of Education A. Lunacharsky, had great recognition in Spain and France, but was not appreciated at home, had a great influence on the formation of his creative method. Vladimir Buinachev with his works, created based on the wooden sculptures of the legendary master in different years, did a lot to restore the name of Dmitry Tsaplin from oblivion.

“Sculpture is a journey. Journey to the world of space and form ”- these words of V. Buinachev express his understanding and attitude to plastic. Moreover, setting off on this “journey”, the master prefers not to follow the route of strict phased work - creating sketches and preparatory drawings. For him, the material is of paramount importance, and, specifically, the material dictates the shape and shape of the future work. Recognizing himself an accomplice in the plastic transformation of the material, the sculptor highly appreciates the elements of the unexpected and unpredictable, which play an important role in the creative process.

V. Buinachev most of all likes to work with stone, moreover, of hard rocks: diabase, granite, sandstone, diorite. He appreciates them for their sonorousness, density and "a special deep glow, inspiring the idea of ​​the eternal and enduring." V. Buinachev is a regular participant in Russian and international symposia on stone sculpture. Nevertheless, V. Buinachev masterly handles any material traditionally used in plastic. This polyphony of his talent is truly unique. The exposition includes works from bronze, marble, ceramics, wood and other materials typical and atypical for sculpture.

The exhibition presents a colored wooden sculpture, the creation of which the master has been fond of recently. He is interested in a certain symbiosis of painting and sculpture, where color and form are equal and have a double effect.

The exhibition reflects the versatility of V. Buinachev’s talent - along with sculptural compositions, his literary works - books and poetry collections are presented in the exposition. Literature plays one of the key roles in the creative life of the master. Even in his youth, he was fascinated by the word world: the sculptor writes poetry and prose, studies the monuments of Russian literature. For many years he has been unraveling the secrets of “Words about Igor’s Regiment”. Having put forward a hypothesis about the encryption of this annalistic monument, V. Buinachev gave his version of decryption and dating. He included his own translation of the old text in the 1998 book of the New Reading of the Words on Igor’s Campaign: the author is known, where he made an attempt to prove that the work belongs to a specific historical person. At the same time, a series of sculptural works dedicated to Prince Igor was created, including his imaginary portrait in marble and the composition "Yaroslavna." The 2008 edition of V. Buinachev included the study "The Cryptography of" Words on Igor’s Campaign "and the novel" Samdrug by the path of trials ".

Sculptors have always been interested in Russian history, including those associated with the Russian Orthodox Church. Along with this, a number of works by Buinachev convey an emotional response to the events of the recent history of Russia. Similar works, which the author himself calls conceptual, are close in style to the school of Moscow conceptualism. Among them are the compositions "Overcoming", "Hammers", "Well", combining different materials: steel, granite, glass, wood and readymade - elements, granite "Red Shovel".

Vivid imagery marked the work of “The Fabulist”, “The Old Poet” and “The Conceptual Poet”, compositions “Autumn Fields delicate aroma”, “Fatal Eggs” and many others.

The master’s works are stored in the collections of the largest Russian museums - the State Tretyakov Gallery, the Moscow Museum of Modern Art, the State Museum of A. S. Pushkin, the Museum Museum in Moscow, the State Russian Museum, the Museum of M. V. Nesterov in Ufa, etc., and also foreign museums and private collections in Bulgaria, Hungary, Germany, USA, Sweden, Yugoslavia, Japan, Morocco.