An exhibition of works by the Honored Artist of Russia, painter, draftsman, graphic artist, master of portrait, still life and landscape - A. Davydov will take place at the Congress Palace (1923-2009). 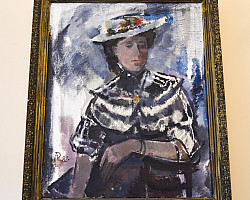 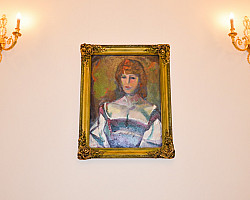 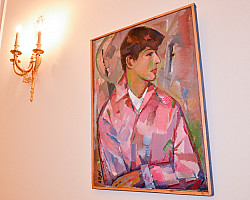 In his warehouse, the artist is a romantic, in his work romantic tendencies are clear. At the same time, Anatoly Davydovich - an artist of form - imagery, the expression of his work follows from the artist’s interest in form, technique, texture, and Anatoly Davydov, a portrait painter, received absolute recognition. His portraits depicting adolescents: close friends, fellow artists, or characters of bygone eras belonging to history have always aroused great interest and great attention.

The exhibition will be available to all art lovers until the end of June 2019 during a sightseeing tour of the palace.

The artist’s father, noting his son’s ability to draw, gave him to study with Y.I. Brovaru, a student of the famous A.I. Kuindzhi. Then the young artist enters the Secondary Art School at the All-Russian Academy of Arts. In 1941, the war began, the blockade of Leningrad. In 1942, in March, along the ice of Lake Ladoga, together with the Academy of Arts of the Art School, she was evacuated to Samarkand. In 1943 he graduated from the Tashkent machine gun school. And from 1943 to 1945. in the rank of junior lieutenant participated in hostilities on the fronts of World War II, commanded a machine-gun platoon. In 1946 he returned to Leningrad, in 1948 he completed his studies at the Secondary School. In 1954 he graduated from the Institute of Painting, Sculpture and Architecture. I.E. Repin (Academy of Arts). In the same year he was admitted to the Union of Artists of the USSR, worked in the field of painting, lithography, monotopy, etching, drawing and book illustration.