From February 7 to March 31 in the Gallery of Classical Photography will be an exhibition of the Hungarian-Russian photographer Andras Fekete "Winter Tales". 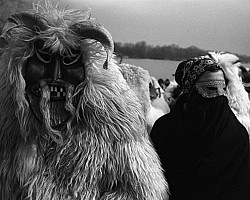 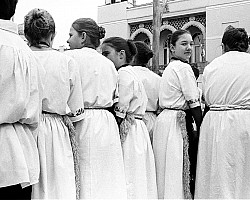 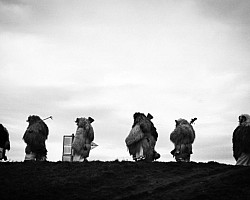 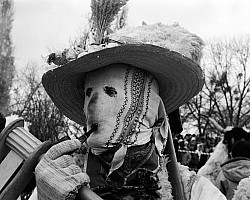 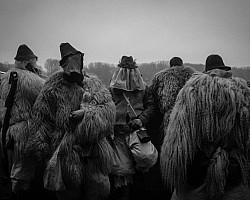 Each of the 30 photographs of the project is like a plot from some long-forgotten fairy tale. Here is a princess and a chimney sweep, here are dashing young people and red girls, here are monsters in sheep’s clothing, huge and mysterious… In his works, the author explores the nature of a fairy tale and stares intently at the faces of people who put things off in order to feel like children for several hours.

Work on the project was carried out for ten years, the pictures were taken at the Bushoyarosh festival in the city of Mojac, Hungary.

“In all cultures, public holidays at the end of winter are the most joyful of the year. I wanted to convey their frantic energy and fuse, and people’s belief that winter and evil are not for long, you just need to take a wooden sword and a rattle and go to help, ”says photographer Andras Fekete.

Andras Fekete was born in 1976 in St. Petersburg into a Russian-Hungarian family. In 2002, he bought the first Leica camera, in 2003, he moved to Moscow, where he was opened by the emissary of modern photography, Irina Meglinskaya (then - “Afisha” photo director). In 2004, he won a grant from World Press Photo Joop Swart. At the same time he worked for the magazines Poster, Poster-Food, Poster-World, InStyle, Glamor. Member of several solo exhibitions. Winner of the Interfoto Prize. In 2016, he became the ambassador of the Hungarian House of Photography “Kappa Center”.

A small country in the heart of Europe, shrouded in fog. They speak a mysterious language, drink a 60-centigrade palinka, raise curly pigs, bathe in hot springs and still put a maypole in the courtyards. One of the few western countries where a fairy tale is part of everyday life.