Exhibition of the Hungarian photographer Peter Cornish "The passage of time"

From January 27 to February 28, the Gallery of Classical Photography will host an exhibition of Hungarian photographer Peter Cornish "The Flow of Time".

Peter Cornisch, 83, is one of the most important authors of contemporary Hungarian photography. The exhibition "The Passage of Time" will feature works that are significant for his work, which reflect the traditional peasant culture of the last 50 years.

The exhibition presents a rich palette of photographs from different years: from the first pictures at a traditional dance evening in Transylvania in 1967 to a conceptual series of recent years, which is dedicated to Transylvanian women looking for work in Budapest. These works illustrate the irreversible processes of globalization that have influenced both the life of a single family and the culture of villagers in general. A retrospective of the Hungarian photographer, filled with the magical aura of the settlements of Transylvania and the Carpathian region, shows a world where time seems to have stood still: even when looking for work in modern Budapest, local women continue to wear traditional dresses. 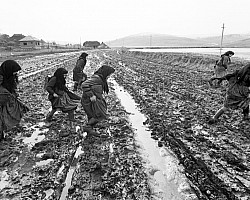 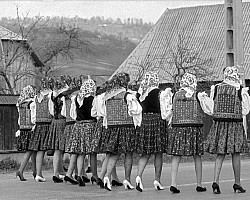 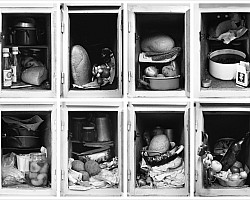 The exposition includes a series of photographs "Labor Migrant" (1979-1988), which is one of the milestones of modern Hungarian photography and is dedicated to commuting. Cornish shows the world of ordinary workers through the eyes of Andras Shkarbit - an excavator who, in search of work, is forced to move between Budapest and his native village far from the capital. Looking at these photographs, one can feel the author’s strong affection for his heroes, to whom he came for decades and whose fates he followed.

In his early works, Cornish refers to the images of rural life in his native country, which in the 70s still kept the traditional peasant way of life with its daily and festive rituals in almost original form, even in the conditions of the "economy of developed socialism". Women at the time of the harvest, open-air church services, folk dance nights - such a typical village life is shown in his photographs by the photographer.

All works are arranged in chronological order, from decade to decade. Thus, it is possible to trace how the traditional peasant way of life changed over time and the first signs of globalization penetrate into the chamber family space. The exposition opens with black-and-white shots from the 1960s, and in its final part, viewers see modern color photographs. The appearance of color, as it were, suggests that the usual life of the Cornish heroes has changed and will never be the same.

The expressiveness of Peter Cornish’s photographs in a new form brings the viewer back to the social tradition of Hungarian photography. Cornish not only scrupulously captures the transformation of the traditional and patriarchal village that took place before his eyes, but also reflects on the changes that were caused by the global historical process, which undoubtedly distinguishes his figure in modern Hungarian photography and makes his work relevant in the 21st century….

The cost of entrance tickets to the Gallery of Classical Photography: full - 300 rubles, full-time students, students (from 12 to 18 years old) - 200 rubles, pensioners, disabled people (of all categories), war veterans and those equated to them, large families - 150 rubles, children under 12 years old and participants of the Great Patriotic War - free of charge.

A virtual tour of Peter Cornish’s exhibition "The Passage of Time" provides an opportunity to visit the exposition and see the works of an outstanding Hungarian documentary photographer: http://www.classicgallery.ru/gallery-virutal-tour/