The new museum of Aslan Chekhoev on December 11, 2020 opens an exhibition of paintings by the St. Petersburg artist Tanya Raush "ECO". The exhibition includes about 40 paintings from the artist’s studio and private collections. 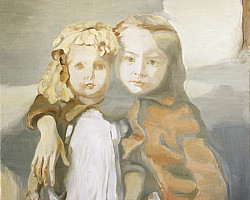 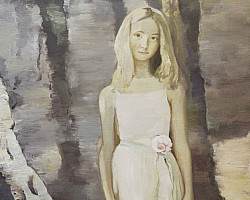 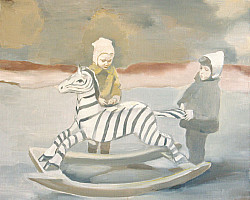 Artist Tanya Rausch views her painting as "genetic material". Her genetic code contains a very rare complex of professional skills: after graduating from the Institute of Painting, Sculpture and Architecture named after V.I. I.E. Repin, she not only began to paint, but also studied icon painting, participated in the restoration of the lost Baroque painting of the Chesme Church of the Nativity of St. John the Baptist. From the iconostasis - the “barrier reef” between us, parishioners, and the sacred space of the altar, the spirit-bearers look at us - saints and righteous men who have gained eternal life and are mediators between people and God.

In relation to the secular painting of Tanya Rausch, the now widespread expression "artistic medium" is especially applicable. Getting used to looking for a medium in art, that is, a carrier of information, we forget that initially a "medium" is an intermediary between the lives of people and spirits.

The artist is unusually selective in subjects and in the style of her art. She paints portraits of teenagers from photographs, when found, when she herself filmed. Children look at the viewer, as they once looked not even at the photographer, but at an incomprehensible point in the lens. Tanya Rausch writes a strange, searching and at the same time defocused gaze, about which you think not only about its direction, but also about where it comes from, feeling painting as a mediator and at the same time a barrier between times and realities.

The first exhibition of the artist’s paintings in the hall of the NOMI magazine in 2008 was called “They are watching”. In the sphere of this gaze, many details of the surrounding world dissolve, physically melt, become conventional, like heaven in baroque icon painting. However, if in baroque altar painting the conditional skies shine with true grace, the hazy backgrounds of Tanya Rausch’s secular paintings are full of tension, anxiety and melancholy. The artist paints her children in the spirit of altar images - forthcoming. But if the saints stand before God, children turn their gaze to fate. They are captured by the lens at the moment of physical transitivity of a person, when his dynamic bodily and spiritual growth is carried out. But, although this growth takes several years, these years are quickly becoming

ghostly backdrop of adulthood. Therefore, there is no activism in Tanya Rausch’s paintings: she is led by the images of sleeping boys of the sculptor Alexander Matveyev in the Crimean estate Kuchuk-Koy, who served as guiding stars for many Leningrad artists and sculptors: Alexander Ignatiev, Naum Mogilevsky, Igor Ivanov, Anatoly Basin, helping with from the momentarily limited Soviet time to the eternal time of boundless European culture.

Likewise, children in the artist’s paintings are removed from the stream of everyday life. Presenting herself and her son as a pair of teenagers in a double portrait, Tanya Rausch writes in reality that never existed and at the same time undoubtedly exists, an infinitely lasting moment in time, in which the ages of her and her son, the spaces of both destinies coincide, where they are equal to each other and united fraternally -sister communication.

The intense “photographic” gaze of Tanya Rausch’s models reminds of the famous posthumous Fayum portraits of the Egyptian Greeks of the beginning of our era, who often recreated the appearance of their deceased loved ones on golden “hieratic” backgrounds, indicating the imminence of a deity in Byzantium. Tanya Rausch’s children, on the other hand, are on our side of the death barrier: they are about to live. Having not yet entered the world of adult affairs, they almost left the world of the game. Caught up in front of this decisive change in body and occupation, they acutely feel both themselves and the world around in all its fraughtiness with an unclear future, in all its incomprehensibility. So, children gently touch the rocking zebra on the playground, as if it were an extraterrestrial aircraft.

The intensity of the experience of an unknown fate for the time being in the painting of Tanya Rausch corresponds to a high degree of symbolic display of predestination in Christian art. When, according to Nietzsche, God died, he died because man first mastered the power that is deadly for all living things, and then, in the 1990s, also the power of cloning, that is, he really became the designer of a new life from the old, bypassing the death phase. However, along with artificial intelligence, this second divine skill, having solved the problems of many people, has now united everyone in the alarming uncertainty of predestination. The medium of this unusual environment, this civilizational, anthropogenic purgatory is the paintings of Tanya Rausch.

They are pictorial evidence of thinking about the possibility of accumulating the life that an artistic image is endowed with. “Maybe the portraits of Titus are enough to keep Titus alive? - asks the artist and answers to herself - But is it still not enough? " Titus, a wonderful boy and young man, summoned from oblivion by the love of his parents, a young man with an inquisitive gaze, who barely had time to start living - an early harvest of death, which he probably did not expect, in any case he did not expect as much as an old woman is drawn into the darkness of the impending oblivion and the old men of Rembrandt.

The heroes of Tanya Rausch are balancing on the border of Christian hope for impending immortality and ancient metempsychosis, when we might think that children who came to the world from recent oblivion may still remember something about the wheel of fate, about the ghostly zone between death and the new physical birth. The artist says that they "got stuck, remained in the depths of memory, as" among gray stones ". Tanya Rausch mentally projects her images onto the walls of Pompeii - a city that was suddenly taken out of life and preserved for centuries, a symbol of a fatal general outcome. Or, nevertheless, an exceptional historical example that accidentally endowed people with the opportunity to see the work of death, forever imprinted in the changing cloud of life.