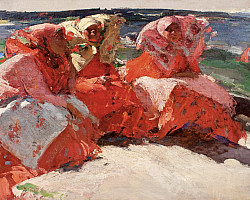 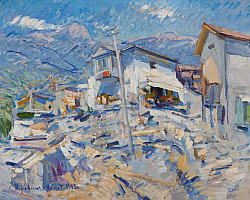 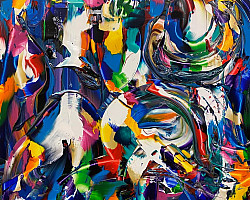 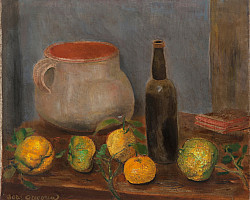 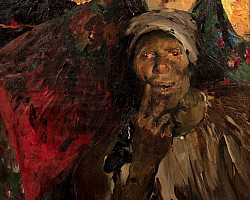 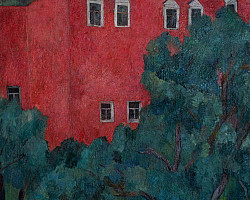 The new project involves about 70 works covering two centuries of Russian art, from Ivan Aivazovsky to Oleg Tselkov and Edward Beckerman. The landscape school of the second half of the 19th and early 20th centuries is represented by such famous names as Nikolai Dubovskaya, Vladimir Fedorovich, Alexander Makovsky and Konstantin Gorbatov. The main core of this section is made up of works by Konstantin Korovin of different years, among which the early masterpiece "Gurzuf" of 1912, works from the famous series "Paris Boulevards" and a wonderful portrait of an elegant woman should be especially noted.

This series is successfully complemented by two paintings by Sergei Vinogradov, who went down in history not only as a landscape painter, but also as a consultant to the famous collectors of French modernism paintings, Ivan and Mikhail Morozov. However, the most significant work and the central exhibit of the exhibition is a spectacular large-scale painting of one of the younger Itinerants and founders of the Union of Russian Artists Association Abram Arkhipov "Women on the Shore" from the famous "Tradeswoman" series. The works from this series are distinguished by their large format, which is exceptional for the work of this master. The size of the canvas "Women on the Shore" (100.5 x 189 cm) evokes Abram Efros’s enthusiastic reaction to a picture similar in format and composition from the same series that was presented at the exhibition "The Union of Russian Artists" in 1913: "Unusual large scale of Arkhipov’s skillful canvases.After all, a meter by two, he did not have such dimensions before! "

Among the younger generation, the central place is occupied by an extensive block of works by David Burliuk, which covers his work, including works from the Japanese, Russian and American periods. The exhibition will include more than ten paintings by the artist, from early cubo-futurist compositions to American portraits of the 1920s and an expressive still life painted in 1948. Particularly noteworthy is the portrait of Vasily Kamensky in 1917, which for a long time was considered lost.

The exhibition includes works by other representatives of the Russian avant-garde: "Portrait of a Mother" by Vladimir Burliuk in 1909, works of unique quality by Robert Falk, Ivan Puni, Alexandra Exter, Mikhail Larionov, Natalia Goncharova, Vladimir Baranov-Rossine, as well as the canvas "Judgment of Paris" ( 1912) Boris Anisfeld is the earliest surviving work depicting mythological and biblical scenes created by the artist during the 1910s (Gardens of Eden, Shulamith, Rebekah at the Well, etc.). All the works of this cycle are characterized by the use of certain techniques of "moderate" cubism by A. Derain and O. Friez.