Digital and analogue art in the framework of the project “Light and Porcelain Nature of Women” is presented in a single space of the exhibition halls of the Gallery of Modern Art of the State Museum of Fine Arts of the Republic of Tatarstan. The exposition consists of works by a designer, painter, multimedia artist, Honored Artist of Russia, Vice President and member of the Presidium of the Russian Academy of Arts, Academician Konstantin Vasilyevich Khudyakov, his wife, artist and designer Marina Leonidovna Khudyakova, as well as author’s art dolls created by their daughter, Academician of the Russian Academy of Arts Alexandra Khudyakova.

The premiere of the exhibition project took place in Moscow in the halls of the Russian Academy of Arts (January 21-February 16, 2020) during the celebration of the 75th birthday of Konstantin Vasilyevich Khudyakov.

The grand opening of the exhibition in Kazan in the Gallery of Modern Art of the Pushkin Museum of the RT will take place on March 12, 2020 at 16:00.

Konstantin and Marina Khudyakov studied architecture at MARCH under the guidance of surviving constructivist professors, studied painting and graphics from realists, surrealists and futurists, “breathed the air of architectural avant-garde” of the famous hostel, the Nikolaev House of the Commune, were innovative design artists of many expositions of major historical museums, including Lenin museums in the country and abroad.

The desire to perfect their work, close attention to details and admiring them, obviously, along with a look at the architect’s world and a desire for the latest technology, led artists to use computer capabilities in art. In the late 1990s, they completely switched in their work to digital technologies in relation to the visual arts.

The paradox is that, having mastered the technological and aesthetic experience of twentieth-century dreamers in digital art, including in virtual and augmented reality, the authors of their new project “The Light Nature of Women” turn it into a weapon against dominance in the multimedia space of unprofessionalism that generates a total unpredictable permissiveness, turning into flagrant vulgarity. Artists create their own and beat Carroll mirrors, extracting characters, objects and plots reflexed from realities and artistically digitized. This new Digital Looking Glass reflects the concepts of good and evil, beautiful and ugly, possible and impossible, freedom and permissiveness, truth and falsehood in art, which are fanciful and wise by great life experience. Artists offer a spectacular project in which they arrange a clash between truth and falsehood in innovative art.

Fine art is on the verge of a renaissance in an absolutely giddy quality: finally, carriers of high-resolution images of sufficient size have appeared, they can now be combined with all the imaginable and unimaginable capabilities of digital cinema, computer graphics, interactive mode. VR and AR technologies (virtual and augmented reality), interactive and innovative programs, stereo and holography are rapidly being mastered. It became possible to create a real Picture using a computer, which makes it possible to immerse endlessly in its bottomless and unpredictable resources. Virtual reality technology (as well as augmented reality) allows us to overcome FORM by transferring one form to another with the help of artistic author’s illusion. Here the form and its reality consist in an endless transformation into a new form. So far, the technical capabilities of the transformations are such that the number of variations is limited, but it is well known in what rapid proportion the power of electronic devices increases. The appearance of spaces in which the previous restrictions and bindings completely disappear is not far off. 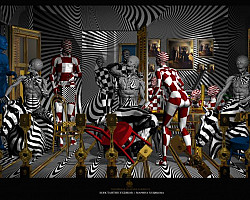 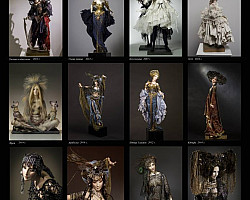 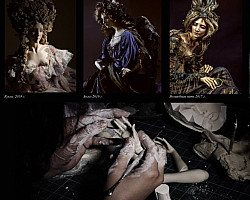 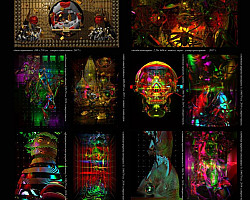 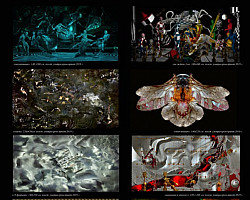 Alexandra Khudyakova studied the craft of the artist and world art in all its diversity and complexity, first of all, from her parents and at the Krasnopresnesnensky art school, and then at the design department of Moscow State Art and Industrial University named after S. G. Stroganova, which, like MARCHI, was formed from the legendary VKHUTEMAS. Unusually, the author’s doll became the topic of her graduation project at the university and, as it turned out, a true vocation.

Doll art is one of the most ancient phenomena of world culture. A toy doll and a model doll - two faces invariably coexist in the space of history. The game beginning, fabulousness and at the same time a certain reminder of machine civilization, alienation, duality, according to researchers, created a special “doll mythology”. In the art of the second half of the 20th century, which is largely aimed at understanding its own specifics, comprehending the boundaries of its own capabilities, the art of dolls as a reflection of the antithesis of living / nonliving, spiritualized / mechanical opens up exceptional scope for expressing the ever-living problems of contemporary art. Alexander Khudyakova is far from understanding the doll as a mannequin serving to demonstrate the costume. Each of her new works is a new image, a new character, a new story. First of all, the artist is interested in the “personality” that she creates. The idea dictates the form, material, external attributes, pose, costume, hairstyle, accessories. Porcelain, lace, beads, glass beads, pearls, rhinestones, shiny chains and rags of precious fabrics - everything is folded into a hammered pattern, akin to the outfits of noble ladies in portraits of the Northern Renaissance. Often in the works, an appeal to the famous sculptural little ballerina Edgar Degas is obvious. The latter is not accidental and is a very important circumstance in the artistic position of the author. Using various types of plastic (zernite, puppen-fimo, Flumo) in her works, Alexandra Khudyakova prefers porcelain, considering it a “precious” material, like wood and stone. The artist is in constant creative search, experimenting, applying new techniques, materials, technologies. One of the first in our country, she began to create articulated dolls. For the first time she used metallized porcelain in a doll (the series “Reflections” on the themes of the works of Konstantin Khudyakov). The effect of mirror metallization brings the doll closer to the sculpture, however, the articulated mobility returns its playful nature to it.

Alexandra Khudyakova does not undertake to characterize the style in which she works. “The art of an author’s doll is a synthetic art,” she notes, “not only in terms of combining various materials, techniques, crafts, but also in a peculiar game with styles. Everything that is capable of realizing the same image conceived by the artist is used without regard to generally accepted framework and rules. ” Renaissance, East, art deco - a bizarre mixture of associations, the author’s imagination gives rise to fabulous images of her works. The exhibition will feature several dozen works of different years - a real celebration of fantasy and beauty.