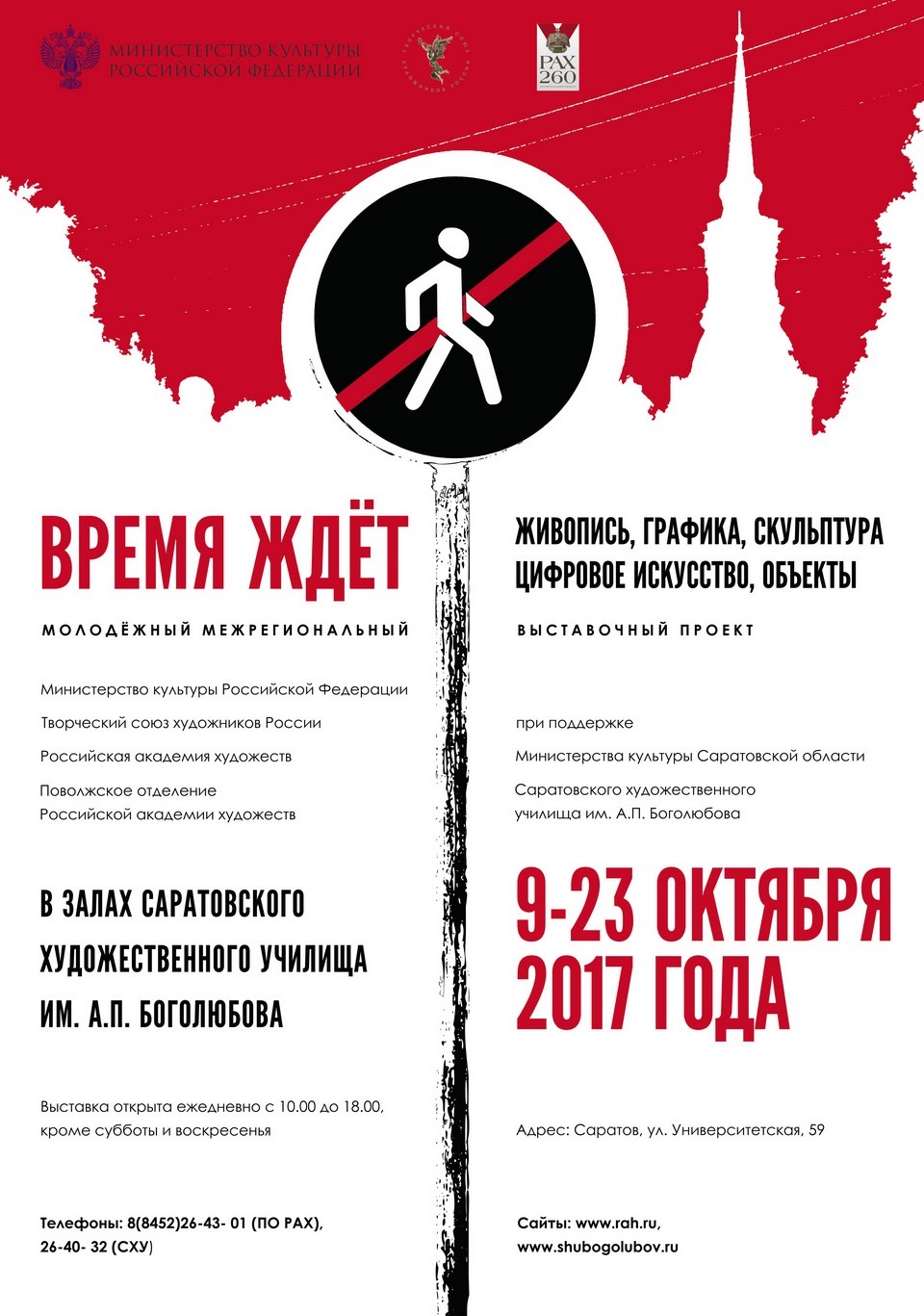 Within the framework of the International Scientific and Practical Conference "Art and Power" and the celebration of the 260th anniversary of the creation of the Russian Academy of Arts in Saratov, a youth interregional exhibition project "TIME WAITS" is being shown.

The exhibition is exhibited in the halls of the A.P. Bogolyubov Saratov Art College (Universitetskaya, 59).

Creative Union of Russian Artists, Visart Foundation for the Development of Visual Art, Volga Branch of the Russian Academy of Arts with the support of the Ministry of Culture of the Russian Federation, the Ministry of Culture of the Saratov Region, Artists’ Union named after A.P. Bogolyubov.
Project Manager: Konstantin Khudyakov
Project Curator: Vyacheslav Ereshchuk
Project Coordinator: Svetlana Kuznetsova
Director: Konstantin Akimov

The interregional exhibition is at the level of selection of participants and exhibiting of the exhibition. Part of the work was created specifically for the project, part was proposed by the authors from the works and thematic cycles of previous years.

The project is focused on the creativity of young, primarily students, and recent graduates of higher and secondary art schools. The task of the organizers is to discover new names in the modern art space, to support young artists, to help them find their place in art.

A separate block is represented by Saratov artists who proposed the “Healing Heaven” art project based on the results of the experimental workshop of the Volga branch of the Russian Academy of Arts and TLC of the Saratov Region. Formally, the project’s concept is realized through the idea of ​​involving contemporary artists in the process of artistic comprehension of the works of KS Petrov-Vodkin through the history of the creation of the monumental canvas “Noon. Summer". In 2017, the hundredth anniversary of the painting and the 100th anniversary of the 2017 Revolution will be celebrated. There was a reason to turn to “eternal themes”, to analyze the shifting of emphasis, points of view and perception as part of the development of “eternal themes” in time and in art using artistic means. Saratov artists divided “Noon” into 26 parts. Each author, in his artistic style and technique, performed his own fragment, after which the pieces, like puzzles, were assembled into a single canvas (panel size 3 x 4.5 m). The project was attended by painters, graphic artists (digital graphics) sculptors. Prepared multimedia project support.

The main issues raised during the exhibition “TIME WAITS”: can history teach anything to humanity? What is history for the younger generation of artists?

The authors expected certain references to history, specific events, not for the sake of creating genre works containing only an illustration of facts, but a rethinking of these facts and, possibly, myths.

The name of the project manifests the need to comprehend its place in time, in the stream of artistic discoveries and directions. This proposal is to express the importance of time in art in general and in the artist’s personal practice. A vector has been selected for the analysis of contemporary art space from the point of view of the subjects of this space, young artists looking for their way in art. One can note the interest of artists in “eternal themes”, in what remains unchanged, despite the passage of time.

At the invitation of the Volga branch of the Russian Academy of Arts, a Moscow artist Alexander Zhernoklyuev, whose work is also presented in this project, will come to Saratov to conduct a master class. October 20 at 17.00 you can take part in an open master class, which will be held in the hall of the Bogolyubov school in the space of the exhibition "Time is waiting."

Residents of Pskov were the first to see the exhibition “Time is waiting” in 2017, where it was shown in the halls of the Pskov State Historical, Architectural and Art Museum-Reserve (August-September). After exhibiting in Saratov, the exhibition will be presented in Moscow.