East Meets West Gallery presents a new art and musical-poetic project "Visible and Invisible Music", which continues the theme of curator Tatyana Paleeva about the synthesis of various types of art in one project. 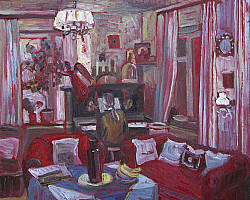 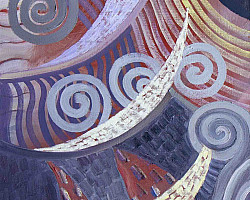 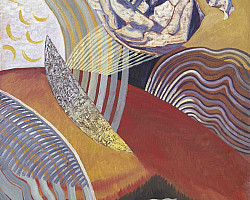 The project will take place from October 21 to November 21, 2021 at the All-Russian Museum of Decorative Arts. The gallery presents a series of new works by Ekaterina Kudryavtseva 2019-2021, written under the influence of musical works by F. Chopin, A. Vivaldi, P. I. Tchaikovsky and G. F. Handel and dedicated mainly to the seasons, as well as a video interview about creativity artist and poet Ekaterina Kudryavtseva "What is needed so that the day does not end…". The entire exposition of the author’s works is accompanied by her poetic works and recordings of the best orchestras in the world performing works on the theme of "The Seasons".

Ekaterina Kudryavtseva has been constantly working with East Meets West Gallery since the early 2000s. She devoted most of her creative life to figurative art. The artist is known as a wonderful landscape painter, portraitist and author of monumental paintings that have a deep philosophical, often religious and symbolic meaning. Turning to a new genre of painting - abstraction - is a new stage in the work of a mature master.

Ekaterina Kudryavtseva celebrates her anniversary in 2021, carrying out a large-scale series of abstract works based on the works of composers “Listening to A. Vivaldi. The Seasons ”,“ Listening to PI Tchaikovsky. Seasons "and others, in which she continues"… the tradition of the Symbolists, who considered music as the element of any creativity, as the heir to V. V. Kandinsky, who professed the musicality of painting "(E. Romanova" The Planet of Ekaterina Kudryavtseva ").

Her passion for classical music led the artist into a new world - the world of lines, spots, geometric shapes, into the world of new compositions and new color combinations. The pictorial surface of the works has also changed: “… it is based on the contrast of the pasty and smooth texture of the canvas, on the vibrations of color tones, on the dialogue of different-sized geometric forms” (E. Romanova “The Planet of Ekaterina Kudryavtseva”). In them, Ekaterina Kudryavtseva acts as a co-author of those musical works that she listens to and as a skillful improviser. A characteristic rhythm appears in them, with which lines and colors interact, and which corresponds to the character and rhythm of a piece of music. It is very similar to musical notation, which reflects the rhythm, tonality and melody of the musical part of the piece.

The culmination of the project will be a special educational concert for friends of the All-Russian Museum of Decorative Arts, which in its international program will reflect the uniqueness of the combination of visual arts and new classical music of the XX-XXI centuries. This concert takes us to a new period of classical music - the XXI century. Presenter Rauf Farhadov - musicologist, doctor of art history and leading expert of the Association of Contemporary Music. The concert program includes both famous names of composers - our contemporaries, such as Philip Glass, Salvatore Sharrino, Sergei Zhukov, and the young Russian composer Denis Khorov. The concert program will be completed by George Gershwin’s Three Preludes for Piano.