The resort city of Anapa is conveniently located on the Black Sea coast between the Greater Caucasus and the Taman Peninsula. Despite the fact that Anapa is considered a children’s resort, due to the diversity of the landscape, developed infrastructure and a huge number of attractions, even the most sophisticated tourist will like the rest in Anapa. Where in the first place is it worth visiting Anapa, where to go and what to see? The 10 most interesting places of the city are described in this article.

The complex of five musical fountains is one of the youngest attractions of the city, which appeared here in 2014. Located in front of the administration building in the very center of the city, the fountains come to life every evening to the sound of classical music and arrange a grandiose show, dancing and sparkling with colorful lights.

Destroyed during World War II and restored only in 1955, today the Anapa Lighthouse is one of the key attractions of the city, a meeting place for lovers and, to some extent, the face of Anapa, often decorating postcards and city guides. A spectacular view of the endless Black Sea and the Greater Caucasus opens from the observation deck of the lighthouse. 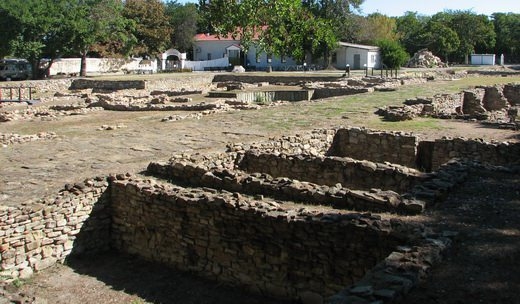 Gorgippia Museum-Reserve, located in the open heart of the city, is a unique archaeological and architectural monument. Museum visitors will be able to see fragments of streets and foundations of the houses of the ancient city of Gorgippia, which was located on the site of modern Anapa until the 3rd century AD. There is also a museum building on the territory of the reserve, which contains valuable artifacts discovered during excavations.

A unique dolphinarium located in the open water area of ​​the sea near the village of Big Utrish. Along the coast there are stands from which spectators can watch the performance performed by marine inhabitants: dolphins, belugas, fur seals and sea lions.

Monument to the Vacationer

At the entrance to the central city beach, you can admire another unusual attraction: an 8-meter high monument representing a full-length man, partially buried in the sand and covered with the main hat of Anapa - a white hat. As you might guess, the monument is dedicated to all vacationers, due to which the resort has been developing so successfully in recent years.

One of the most visited places in the city. Walking along the promenade, which stretches for more than 1, 5 kilometers along the Black Sea coast, you can admire the vast expanse of water, enjoy the silence and coolness of the southern evenings, take pictures with numerous floral arrangements, the main of which, of course, is the famous ship with red sails.

Not far from Gorgippia you can find another architectural monument. The so-called Russian Gate, which is a fragment of the Turkish fortress that once stood here, is a symbol of the liberation of Anapa from the Turkish yoke.

In the village of Big Utrish near Anapa, you should visit the building, known as the Lermontov gazebo. It is believed that it was here that the Russian poet and prose writer stayed to rest, and also wrote his work Taman and several chapters of The Hero of Our Time. In addition, in Anapa you can book a tour of Lermontov’s places with a visit to the famous M. Yu. Lermontov’s house-museum.

Holiday information in Anapa on https://www.anapabest.ru

Located in close proximity to the central city beach, the Golden Beach water park is considered the largest and most diverse in terms of entertainment city water park. There are more than 20 water slides and attractions for every taste: more calm and very extreme. For the youngest visitors there is a children’s town with many slides, ladders and labyrinths.

Located in the very center of the city’s amusement park, the sculpture in the form of a huge white hat has become a kind of hallmark of the city, without which no self-respecting tourist leaves from Anapa. Among the holidaymakers, even the tradition to take off their headgear and bow to the sculpture, passing by it, has taken root.