Imprimaturism - the term used in painting is the color tinting of surfaces with ready-made white primer, which has been practiced by artists in Italy since the 16th century.

The color of the soil can play a huge role in painting, if you use it by the methods of the ancient masters, give it the opportunity to shine through layers of paint, and in the same way take a direct part in the overall effect of the art of painting. 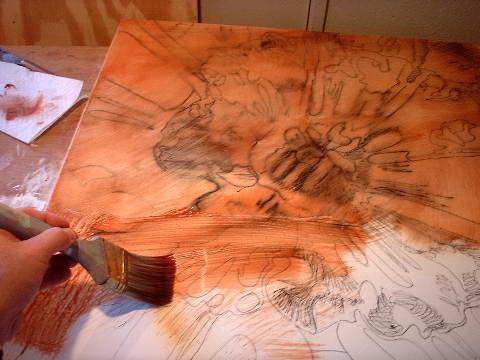 Due to the fact that the translucency of the soil can very favorably affect the paints lying on it (translucent and transparent), it is often given a white shade to the soil, to which, if you wish, you can add absolutely any shade.

Whatever the color of the soil, it is able to show its activity with respect to the tones of the layers of the painting lying on it, and only under such a condition, if the paint on it has an not very impenetrable layer. Strong layering of paints can completely destroy the effect of any color in the ground. When working on colored soils, one should not forget that the oil layer of paints can acquire a strong degree of translucence over time, and in this regard, the color of the soil will continue to appear much stronger than in the picture just painted.

The color of the soil in the art of painting has another meaning, similar to a tuning fork in music . Thus, on gray soil it will be much easier to sustain a painting in gray tones, on red - in hot tones, on dark shades of soil, respectively, in dark tones.

The colorful effects of the ancient art of painting consisted of rows of layers of soil shining through each other. The color must be selected in strict accordance with the colorful and light effect of the picture.