Mannerism is a term for stylistic tendencies and a certain stage in 16th-century European art. This period expressed the decline of the artistic ideals of the Italian Renaissance. Mannerism as an art is characterized by the superiority of form over content. 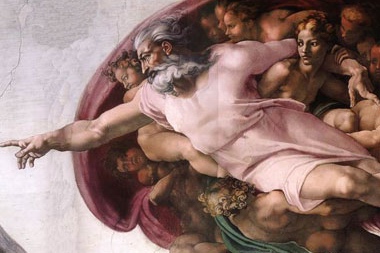 Masterly manners, sophisticated technique, exquisite workmanship do not correspond to meager designs and imitation of ideas. For mannerism of character, some tiredness and exhaustion of style. Just for this reason, the term “mannerism” is often called the final, crisis stage of the development of an artistic style in different historical eras. Mannerism marks the degeneration of the old and the imminent advent of the new style. This role was especially vivid in Italy. There, the mannerism of decline portended the appearance of Baroque.

A few years ago in European stores appeared tile in the bathroom with fragments and whole images reproducing the plots of Baroque masters. Today it can be purchased in Russia.

The term began to acquire a qualitatively new meaning among Venetian painters of the mid-16th century, they used it to refer to the contemporary style of artists with a touch of “new style”. In this sense, the term meant a good appreciation of the original and original in art, which went beyond the limits of classical traditions. The harmony of form and content, achieved with such difficulty, began to gradually disintegrate due to the enhanced development of individual elements and means - silhouette, texture, brushstroke, line, stroke. It was not the beauty of the whole that came to the first place, but the beauty of an individual detail.

A similar path was inevitable in the process of evolution of the forms of various artistic styles, the greatest in the achievements of art of the Renaissance gave birth to outstanding mannerism. Late mannerism is characterized by the destruction of compositional ties. In Italian architecture, this direction was expressed by arbitrary mixing and illogical use of elements of different orders and archaisms.