Portrait miniature is a portrait of a small format (from one and a half to twenty centimeters), which is distinguished by its special meaning and subtlety of execution. In addition to this, in portrait miniature, I single out a peculiar technique of performance and use of means that are inherent exclusively to this type of pictorial form. 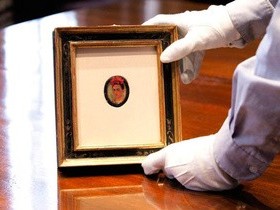 The formats and types of miniatures are very diverse: they are written on paper, parchment, ivory, cardboard, porcelain and metal. Gouache, watercolor, oil paints and artistic enamels are used as paint. The image must fully correspond to the compositional decisions of the author or the wishes of the customer, it fits into an oval, rhombus, circle, octagon, etc. Such portrait, which is made on the thinnest plate made of ivory, is considered to be a traditional portrait miniature.

Both a miniature and a pictorial portrait can be ceremonial or chamber, single-figure, two-figure or multi-figure, whether or not to have a plot basis. Fully consistent with the traditions of a large portrait, a miniature face is placed on a neutral background. But the thumbnail is always more intimate. Small images are inserted into the medallions that are worn on the chest, or they decorated the covers of snuffboxes, watches, fans and bracelets, rings and brooches. To protect the fragile base from breakage or deformation, and the picture from any physical damage, the finished miniature was inserted into a metal frame, with slightly convex or flat glass.

Miniature portraits used to be taken when men went on a military campaign or journey. At the beginning of the 19th century, such portraits became part of the interior, in living rooms, in libraries, in offices, miniature portraits were placed in frames and hung on the walls.