The legendary Arsenal exhibition opened in America exactly one hundred years ago. Then in New York did not appreciate contemporary art. Crowds of visitors came to the halls and hostilely spoke about the paintings. Newspapers also wrote about paintings with conviction. There has been a lot of controversy surrounding contemporary art for several decades. But gradually the caustic remarks began to be replaced by passionate eulogies and some began to wonder where to buy paintings for the interior from among those presented in the exposition. 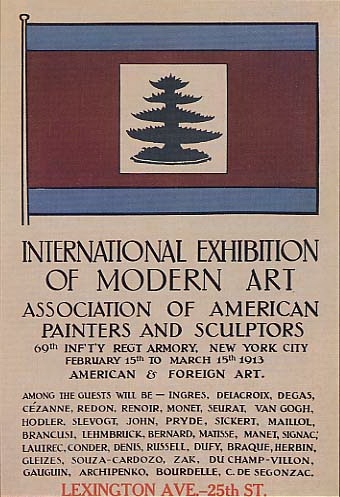 The exhibition opened on February 17, 1913, and on March 15, paintings were exhibited in Chicago, and a month later in Boston. The Association of American Painters and Sculptors organized an exhibition for young artists to explain to the public what contemporary art is with their works. At that time, reproductions, all the more color, were rare and only at the exhibition could one get acquainted with a new generation of artists.

The arsenal exhibition was criticized by newspapers. Cubists Picasso and Duchamp were particularly criticized, and students from the Chicago Art Institute (Art Institute) dealt three paintings by Matisse. In protest, they burned the canvases.

The exhibition was perceived as hostile, because third-rate fakes dominated on it. Among the unsuccessful works, true masterpieces faded. Even the famous Europeans Delacroix, Manet and Degas presented weak pictures to the audience. And American authors Stuart Davis and Edward Hopper have not yet learned how to really create.

The only picture was approved by all - "The Old Woman with the Rosary" (1896), written by Cezanne. The paintings of Matisse and Van Gogh at first did not find fans.

Pictures of Picasso, as it seemed at that time, look ridiculous and ugly. They reflected the rapid and controversial changes in foreign painting associated with the invention of photography. Using the photo, the artists turned objects around, reduced the space, transferred objects at the request of the foreground to the back, and then created unrealistic paintings. They also tried to crush objects into fragments. Such a technique was not perceived at the beginning of the 20th century. But now it is of interest. These paintings, as well as Austrian painting at the Bakhrushin Museum in Moscow, attract many fans of painting.