JERUSALEM. In Jerusalem, the ceremony of transferring the exposition of the Israeli National Holocaust Memorial and Heroism Yad Vashem to the painting "Freedom!" By Yevsey Moiseenko, the artist. The work from the collection of the Art Russe Foundation was handed over to the museum by the founder of the fund, Andrey Filatov, for a long-term exhibit.

Written in 1962, “Freedom!” Reflects the personal experience of the master of the Leningrad art school Evsey Evseevich Moiseenko, who spent more than three years in the Nazi concentration camps during the Second World War. The picture shows a haggard man walking with his arms wide open towards the light from a doorway with a grill in the background. Exhausted, but thirsty for life, a prisoner who conquered death.

Evsey Moiseenko - People’s Artist of the USSR, full member of the USSR Academy of Arts, Hero of Socialist Labor, laureate of the Lenin and State Prizes of the USSR. In July 1941, interrupting his studies at the Leningrad Academy of Arts, he volunteered for the front, was captured in battles near Leningrad and spent more than three years in concentration camps in Poland and Germany. He fled three times, was returned to camps three times, and in April 1945 he was freed by the American forces from the Altengrabov camp. Moiseenko returned to the front and ended the war, fighting in the 3rd Guards Cavalry Corps. In the fall of 1945, after being demobilized, the artist continued his studies at the Academy. The spiritual experience of the war years formed a unique style of the artist, characterized by piercing emotional depth, vibrant palette and rhythmic dynamics. It was this style that made Moiseenko one of the leading masters of the Leningrad school of painting. “Freedom!” Is one of nine works of the military series, united by the title “This must not be forgotten.”

The painting is donated to the Yad Vashem Memorial for a period of 15 years and will be presented in the permanent exhibition of the new museum pavilion.

Curator of the art department of the museum Eliad More-Rosenberg: “We gratefully accept the painting“ Freedom! ”By the Russian artist Evsey Moiseenko, which was kindly transferred to our museum by Mr. Filatov. This work, which came from the pen of a representative of the Leningrad school, a former prisoner of war, will be on a par with those works of Russian masters who depicted the crimes of Nazism and the Holocaust of the Jewish people with incredible accuracy.

Andrey Filatov, founder of the Art Russe Foundation: “26 million dead - the price that the Soviet Union paid for victory in the Great Patriotic War. The theme of World War II, which became one of the most tragic pages in the history of Russia, had a tremendous impact on the work of many generations of Soviet artists. And especially valuable in this series are paintings by eyewitnesses who went through the spiritual and physical trials of war. “Freedom!” Eusei Moiseyenko is a very personal work of a wonderful painter, telling that the spirit of a person, his desire for freedom is stronger than the most terrible trials. Last year, the painting was presented in the London Saatchi gallery at the exhibition of the Art Russe Foundation, dedicated to the 70th anniversary of the Victory over fascism, as well as at the exhibition "Collection of Russian and Soviet Art of the 20th Century Art Russe: War and Peace" in Abu Dhabi. Now she can be seen in Jerusalem. I am very grateful for the opportunity to exhibit this picture here in the Yad Vashem Memorial, this unique and tragic place of memory and testimony of millions of victims of Nazism. ” 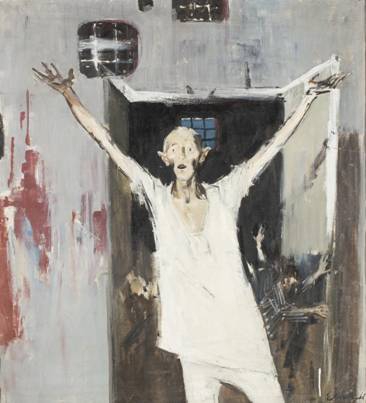 Yad Vashem (Hebrew יד ושם) is the Israeli national memorial to the Holocaust and Heroism. The memorial is located on the Mountain of Remembrance and is a complex located on an area of ​​more than 18 hectares. It is a world center for the study of history, memory of victims, research and documentation of the Holocaust. For more than six decades, the Yad Vashem Memorial has dedicated itself to perpetuating the memory of Jewish men, women and children who fell at the hands of German Nazis and their accomplices, as well as preserving and transmitting the legacy of people who survived the Holocaust. Equipped with the latest science and technology museums, world-class research and educational centers, as well as the richest archives and libraries of the memorial create unprecedented conditions for intergenerational learning and reflection, including thanks to large-scale online resources used by millions of people around the world. Based on the memory of the past, the Yad Vashem memorial aims to preserve and transmit meaningful knowledge about the Holocaust to future generations.

The memorial collection includes about 10,000 works of art, most of which were created during the Holocaust and are a unique reflection of personal experiences. Each of these works is, in fact, an indispensable personal testimony of human existence during the Holocaust.

The Art Russe Foundation, led by entrepreneur and philanthropist Andrei Filatov, was created in 2012. The fund aims to build a deeper understanding of Soviet and Russian art and its contribution to world culture with a world audience. The fund specializes in collecting samples of Russian art created in 1917-1991. and related to the artistic style of socialist realism, and the implementation of educational projects to support and popularize Russian art at the international level. The objective of the fund is to increase the popularity of works of this genre through exhibitions, the provision of works to museums and galleries in various countries and the publication of books and catalogs on the most iconic artists and their works.