The cultural layer of the "secrets" of the Soviet underground

The exhibition "Secrets: digging in the Soviet underground. 1966-1985 ”opened at the Garage Museum of Modern Art. Unusual and bold, since daring in nature - not every curator will dare to show the general public the narrow direction of a movement, especially since the exhibits are not for the most part traditional art objects. This is not an exhibition of paintings or sculptures, this is not an exhibition at all - it is a cut of the inner life of artists, authors of the Soviet underground of the 70-80s.

The gallery hall seems monochrome, it seems more like an archive in a free style than an exhibition space of contemporary art. But, in this truly 2D plane on thin sections of matter, so many are layered that a separate stand or display case of each artist at any moment can simply explode - he, a brave author, does not fit into these planes. Behind each name is life, light, and oblivion, but not ideas. Tightly tight, meaningful are the pages of a notebook, a piece of black soil, notebook fields, hand-embroidered jeans, photographs, figures, self-published books. All these are the secrets of a secret society, a society of secret knowledge.
“And the air - glass from a child’s secret
spring in a glass splashes on the tablecloth summer
…
so desperate - that’s the whole secret:
buried in the ground - flows in the river - warmed in the hand "
(Memories of Neskuchny Sad, 1971)
“Secrets” - like a child’s game that is familiar to everyone from childhood, where does it come from? In answering this question, the essence of the transformation is revealed - under the naive-personal, under the closed and behind the scenes - the author hides the idea, the thought, which he can show only to the elect, his own. But who are these people of their own, will they understand, will they see behind the muddy glass-window exactly the meaning that the author makes? In reality, this does not matter, because the thought has already been issued to the world, even if it is a thin layer, but it has been launched and is beginning to fruitfully form a new space around itself.

The authors showed themselves in different creative directions of non-conformist art. Moscow hippie Vladimir Teplyshev (Zen Baptist) published the Alternative magazine in samizdat, in which, inter alia, he narrated the ideals of hippie Christians and the revolution of Jesus. The magazine reflected the ideas of ecumenism - the Christian movement organized by Sandr Riga. In many cities there was a network of discussion clubs of the ecumenical movement. The desire for “non-existence” (the term of the anthropologist Alexei Yurchuk) of artists of that period is demonstrated by the works of Vyacheslav Akhunov, Armen Bugayan, Yuri Albert (Domestic help, 1979), designs by Andris Grinberg, Rimma and Valery Gerlovins, “Nest” groups, “TOTART "," Peppers "and others. Creativity of the authors of the generation of “janitors and watchmen” became reference points, centers of attraction for supporters of unofficial art.

How much has the historical state of affairs, the era of stagnation, the Soviet past influenced the formation of the underground culture of the late socialism period? How did the artists manage to coexist in two parallel worlds? For example, the work “Breathe quietly” against the background of expressive photography. Or a screened speech - a poster by Zhigalov 1981 "My last work." Viewers are shown the gap between the two worlds, the official life of the Soviet person and a private enclosed space, accessible only to the elite.

Even now, decades later, much of what the artist wanted to say remains unclear, so how can we understand him. And what about the viewer of that period? Only secrets and only for their own… Some exhibits broadcast such a personal, sacred meaning that sometimes they cause inconvenience, like peeping, as if you really unearthed someone’s secret treasure, a personal secret. But at the same time, you realize that what is hidden is the author’s thirst to be understood, or at least heard, and the curators of the exhibition realized their dream. We see, read, touch, recognize them. And thank you for hiding, not for burying.

Is such a conceptual model close to contemporary authors of unofficial art, when it would seem that it is not necessary to hide? Do we feel the difference between protest and unofficial art? It is in this vein that it is important to see the temporary transformation of the underground. See the chronicle of the formation of cultural layers until the 1980s, the perestroika period of the 90s, the formation of a number of the latest trends of the 00s. All these time slices were formed by a different socio-political environment. And closer in time to a progressive viewer. 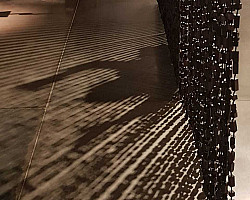 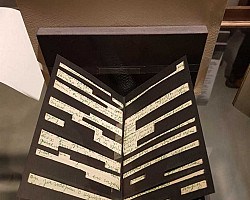 Adoption progress exists, it is noticeable at exhibitions, auctions, in galleries. At the exhibition “Secrets: digging in the Soviet underground. 1966-1985 "- a full house. And this means that contemporaries are ready to understand and share. But this is progress. Let us hope that there will be more such exhibitions and one of them will form an understanding of the chronicle of the development of the underground in Russia. So far, we have just begun to fill the void and gaps in unofficial creativity.

The modern viewer, each for himself, decides that these are the shadows of the past or beacons of the cultural depth of the present. Do authors of our time, artists of a new era, reach these depths? We hope that in the near future museums and galleries will be fruitful for such in-depth exhibitions and everyone can be initiated into the magic of the underground.