A leading international project in the field of art business, Christie’s International, announced the results of sales for 2010, which totaled 3.3 billion. pounds (5 billion dollars). These results indicate a 53 percent increase over last year, when the total figure was 2.1 billion pounds (including a buyer’s premium). These figures are the highest over 245 years of Christie’s existence, as well as the most significant results of the year in this area among all participants in the segment. The total amount also includes sales under private agreements of 369.3 million pounds (572.4 million dollars), which is 39% more than in 2009. 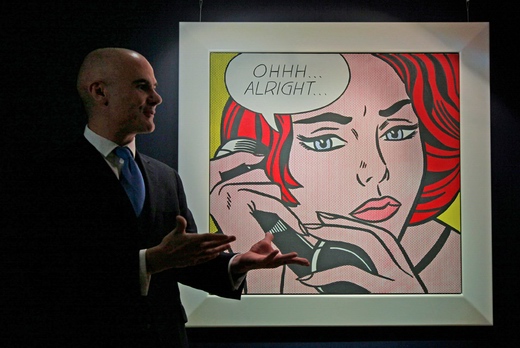 In the photo (made October 6, 2010 during a press conference in Hong Kong) - Conor Jordan, senior vice president, head of Impressionism and Modernism at Christie’s in the United States, introduces the audience to the canvas of the representative of American pop art Roy Lichtenstein ( Roy Lichtenstein) entitled "Ohhh… Alright…" ("Ahh… Good…"). The auction hit the work on November 10, 2010 as part of evening bidding in the segment of post-war and contemporary art. Bidding took place in New York and was remembered for setting a new price record for the artist. Liechtenstein’s work “Ohhh… Alright…” was sold for $ 42.6 million - the anonymous bid made over the phone became decisive.

A year of great sales success and record results helped Christie’s consolidate its market leadership and sell 66% of works of art, which allowed $ 50 million to overtake its closest competitor. The auction was also honored to present the most interesting collections of the year, including the collections of Mrs. Sidney F. Brody, Walter and Phyllis Shorenstein, the Andrew Lloyd Webber Foundation, Michael Crichton ), Max Palevsky and others. The painting "Naked, Green Leaves and Bust" by Pablo Picasso broke all records for the value of an object of art, having gone under the hammer for 106.5 million dollars (70.3 million pounds). For the year at Christie’s were sold three of the five masterpieces, and the total number of works of art amounted to 606 works.

High margin rates in all price segments remained stable for the art market. In 2010, the average auction margin level on each lot was kept at 79.4%, which is comparable to 79.7% in 2009. At the same time, Christie’s proven reputation in high-level transactions made it possible to achieve a record 90% margin on works of art priced from 500 thousand up to 10 million pounds. It should also be noted the performance of Christie’s regional offices, such as, for example, in South Kensington, where in 2010 the total sales amounted to 104.1 million pounds (161.3 million dollars). This also indicates an increase in interest in art at a relatively low price.

“2010 was a year when records were broken, but by the beginning of 2011 it’s clear that all areas of the art market continue to expand,” said Steven P. Murphy, CEO of Christie’s International. - Christie’s international team managed to gain attention and satisfy a growing audience of art connoisseurs from around the world, as the market is growing now. Among the many tangible results, I would like to note the growth rate of the auction, the turnover of transactions under a private agreement and the increase in online transactions, which indicates the desire of buyers to participate in all forms and formats of bidding. ”

At the same time, Christie’s international expansion strategy allows you to rapidly increase the audience of buyers of art objects. And, although in the countries where the auction is held, the ratio of new and old customers is traditionally higher - the number of registrations from new customers from the UK and the USA has increased by 40% - the indicators of Asian countries and BRIC countries (Brazil, Russia, India, China) did not upset ) In 2010, about 7% of new registered participants came from Hong Kong and China, and the total result of new registrations for both regions was 28%, which indicates their growing need to join the world of art.

In 2010, Christie’s sales under private agreements grew in such areas as works of art by old masters, jewelry, impressionism and modernism, as well as post-war and contemporary art. Private sales rose to 39%, or £ 369.3 million ($ 572.4 million) in cash, and now they account for 11.4% of total sales. It is expected that in the next few years the growth of such transactions will continue.

Mr. Murphy concluded: “This was probably the best year for Christie’s and the entire art market. The results of 2010 are the fruit of a decade of efforts by a strong and dedicated team. Christie’s still prioritizes the interests of its clients, both new and regular, demonstrating an innovative approach to how and what to represent at the auction, and focusing on the content of work and expertise. We have found the right place in the expanding expansion of the art market and look forward to the next decade. "