Scam of the century: fakes under the Old Masters upset the world of art

AMSTERDAM. This picture convinced experts in The Louvre . The main French cultural officials declared it a national treasure. Dutch curators at Mauritshuis and the Rijksmuseum no doubt joined the chorus of scholars who decided that the mysterious portrait of a man dressed in black was a previously unknown masterpiece by Frans Hals. Many considered the “Portrait of a Man” not only a rare find, but also a truly great example of the work of Old Masters. 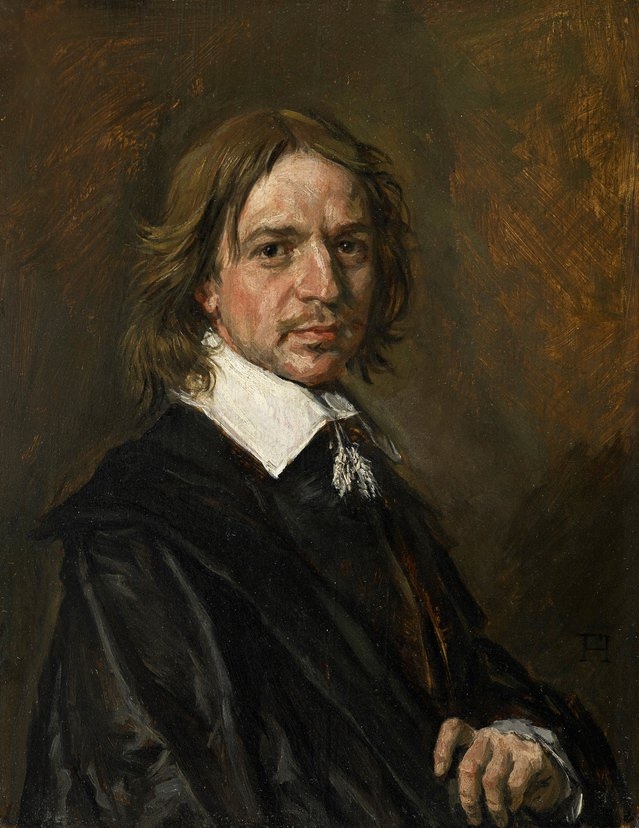 Sotheby’s designated "Portrait of a Man", previously considered the work of Frans Hals, a modern fake.

In 2011, Sotheby’s auction house in New York sold the painting to a private collector for $ 10 million. However, this month, Sotheby’s announced the work of a modern fake. The portrait was involved in a scandal that erupted back in March when the French police arrested a painting attributed to Lucas Cranach the Elder. This picture hit the market through the same collector as the fake Hals. The auction house sent Hals for a technical examination, where experts found traces of materials produced in the 20th century in paint, which meant that the painting could not have been painted in the 17th century. Sotheby’s canceled the transaction and reimbursed the buyer for all expenses.

If Sotheby’s experts were right, the question of who could commit such a forgery remains a mystery. According to information from representatives of the auction house, the investigation is ongoing, but its details were not disclosed. The French authorities are also silent. But regardless of who is the author of this magnificent adventure, it remains completely incomprehensible how the fake was able to deceive such a number of leading experts from the best museums in the world. These circumstances clearly demonstrate how truly complicated and subjective the process of authenticating art objects.

The picture "spent" many, but not all. Martin Bale, an outstanding restorer of paintings by the Old Masters, has been working on the restoration of thirty Hals paintings over the past seven years. When he saw the results of the last analysis of the painting commissioned by Sotheby’s experts from Orion Analytical, he said that he had previously suspected that the painting was a fake: “Those who studied the painting are good experts, but they are not familiar in detail with the handwriting of Frans Hals. And this is another reason to be careful, ”he said.

The most exciting question today is: are there other fakes distributed by the same source? At the moment, several paintings are considered “new discoveries”, and they all came through the hands of the same collector. These include David Contemplating the Head of Goliath, Orazio Gentileschi, and the portrait of St. Jerome attributed to the follower of the 16th-century Italian artist Parmigianino, which Jerome Sotheby’s auction house sold in 2012 for 842,500 US dollars. This picture has already been withdrawn and also sent for additional research. We wrote about both cases a little earlier:
Gentileschi’s painting discovered 4 years ago may turn out to be a modern fake
"Saint Jerome" Parmigianino - a fake? Investigation of scandal surrounding falsification of paintings continues

“Scandals grow like mushrooms after rain,” said Bob Haboldt, an art dealer specializing in Old Masters in Holland. Some other art dealers tend to downplay the threat. An authoritative London dealer, Johnny van Haeften, said: “I think these are isolated cases, the tragedy does not have the scale that many people tend to think.”

However, the question remains open. How could a fake pass checks? New works of Hals appear very rarely, and nothing was known about this picture at all. She is not mentioned in any scientific work about the artist’s work and has never been exhibited anywhere in the 350 years that have passed since his death. These facts should have alerted experts and become the cause of an in-depth study of the canvas.

Martin Bijl, the former chief restorer of the Rijksmuseum, said he was unable to recall any unknown work by Hals discovered at least in the past 25 years. Bale believes that he should have told about his suspicions, but he was stopped by the fact that this is not the first time that scientists discover the history of a painting after the painting itself is found.

The origins of today’s history should be sought in 2008, when collector Giuliano Ruffini asked experts at Christie’s in Paris to take a look at the painting he said he bought from a Spanish art dealer.

According to Philippe Scarzella, a lawyer for Ruffini, he told art experts that the work “may belong to the followers of the Hals or to the Hals himself.” Specialists of the auction house after examining the painting said that it was very similar to the original.

Christie’s issued a license for the export of paintings in order to study it more thoroughly in London. Such licenses must be authorized by the Louvre and the French Ministry of Culture. But instead of allowing the painting to be taken out of France, officials declared it a national treasure and wrote out a temporary export restriction. In the same month, the Louvre decided to try to purchase the canvas. The contract was drawn up in October 2008 and sent to lawyer Ruffini. The contract provided that the Louvre buys the “Portrait of a Man” by Frans Hals for 5 million euros through the auction house Christie’s.

Blaise Ducos, the chief curator of the Dutch and Flemish painting department at the Louvre, was invited to inspect the painting. To establish authenticity in the research center for restoration, the portrait was examined using x-ray, infrared and ultraviolet radiation. Analysis of coloring pigments was not carried out. The Louvre invited other prominent scholars, such as Quentin Buvelot, to consult with Mauritshuis in The Hague.

“Several well-known art historians have already seen this painting and expressed their enthusiasm for its authenticity,” Byuvlot wrote in an email to The New York Times. “This work was done with such grace and skill that many experts believe it was written by the master himself,” he added.

After the sales contract was drawn up, Belinda Bowring, spokeswoman for Christie’s, expressed doubts about the origin and attribution of the painting. She refused to discuss specific details, but the auction house asked Ruffini to guarantee the authenticity of the work. In response to this, the seller sent a letter in which he “is in no way responsible for the attribution and authenticity of the work,” which, as he noted, has already been in the hands of experts. “My client is not going to guarantee anything, this is not his job,” said Scarsella’s lawyer.

At the same time, Dukos invited a number of well-known Dutch and French entrepreneurs, as well as several experts on the work of Hals to take a look at the picture in private. Haboldt attended one of these meetings, which took place at the residence of the Ambassador of the Netherlands in Paris. “I had no doubt at that time,” said Haboldt. - “Of course, I did not look at her through the eyes of the buyer. The painting has already been verified in the Louvre. "I looked at her and congratulated the buyer, but I did not try to analyze it in terms of a possible fake."

In the end, the Louvre refused to buy the painting, but it is not clear why. Haboldt called the reason that the museum could not raise the required amount. The official statement of the museum says that after all the procedures, taking into account the whole context of the situation, the Louvre does not intend to acquire the canvas.

The lack of any information about the painting did not alert Buvlota and Dukosa, who co-wrote a large material on the painting and published it in Burlington Magazine in 2014. “It’s not uncommon when paintings by Old Masters are not listed in existing literature,” they said. - “We should not forget that the first serious catalogs appeared only in the XIX century.”

After the temporary export ban was lifted in 2010, London-based art dealer Mark Weiss purchased Portrait of a Man from Ruffini, reportedly for $ 3 million. In a statement he emailed to The New York Times, Weiss said that he was confident in the authenticity of the canvas, as many authoritative researchers confirmed this authenticity. “The only vote against was Hals creative specialist Claus Grimm, who believed that the painting was painted by Hals’s son, Peter.” 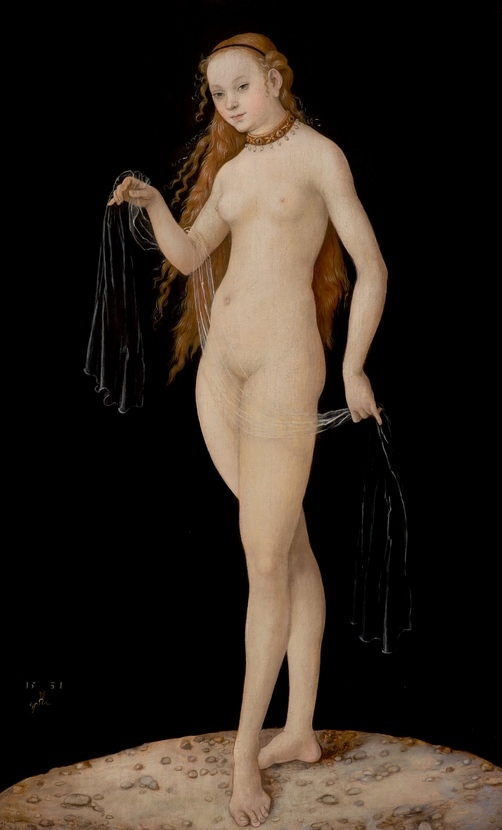 French police arrested the Venus with the Veil, attributed to Lucas Cranach the Elder, for fear of its authenticity.

The very next year, the painting was sold through Sotheby’s for $ 10 million to private collector Richard Hedreen of Seattle. Herdin refused to comment on the situation, but Sotheby’s spokeswoman Lauren Gioia said the following: “We could not confirm the authenticity of the picture, since we were not involved in the process of studying it. Obviously, we did not know that it was a fake. ”

Everything was fine until March of this year, until the French police arrested Venus with the Veil, owned by the Prince of Liechtenstein, right at the exhibition in Aix-en-Provence. The event caused a stir in the art community: the picture was associated with the Ruffini collection. After that, Sotheby’s experts wished to once again look at the picture, since the very fact of its discovery was compromised. Hedrin sent them a picture, and Orion Analytical experts got down to business. The result is known.

But even after that, Weiss still doubted. He insisted on the possibility of conducting an acquittal investigation, which he justified by the enormous influence that the fact of establishing fakes for the art market and art history could have.

Meanwhile, French police raided Ruffini’s mansion near Parma, Italy. During the search, two more paintings were discovered: the carnival scene, authored by Peter Brueghel (Pieter Brueghel the Elder) and the head of Christ, previously attributed to Andrea Solario (Andrea Solario). Ruffini himself has not yet been charged. “The French police hope to find a secret workshop where all these fakes were made, but so far they haven’t found anything,” Scarzella said in an interview with The New York Times. Moreover, the lawyer Ruffini appeals to the fact that his client was not aware of the fakes, on the contrary, he trusted the experts to establish the authenticity of his paintings, and, as a result, does not bear any responsibility for everything that happened after that.