WILLIAMSBURG. Analysis and testing of The Miracle of a Slave confirmed the assumption that it was written by Paul Cezanne as a copy of the original work about 300 years ago.

The replica was made for educational purposes and is part of the exhibition held at the Muscarelle Museum of Art. The exhibition runs until August 13th. It consists of six paintings by old masters, which the museum was able to buy, due to the fact that they were incorrectly identified and underestimated. 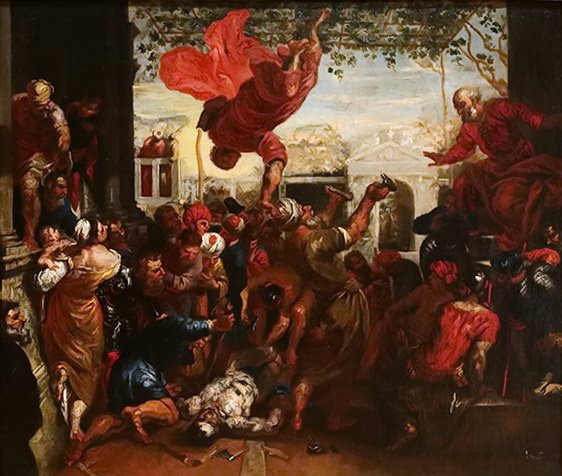 The Italian Renaissance artist Jacopo Tintoretto Robusti painted the original of this painting in 1548. The original is currently in the Academy Gallery in Venice. It is referred to as the “Miracle of the slave” or “The Miracle of St. Mark liberating the slave,” and depicts the story of St. Mark saving the slave who was punished for worship.

The original is a much larger work than a copy of Cezanne, which was not previously identified and entered the Dorotheum auction in Vienna in 2013.

“I saw this and realized that it was Cezanne from his early experimental teenage period, around the end of the 1860s,” says Spike, who is one of the most famous art connoisseurs of the old masters and, in particular, the Italian baroque artist Mattia Preti. Together with the director of the museum, Aaron De Groft, they once again examined the painting before deciding to buy it for the museum.

Spike points out the small changes Cezanne made for his work compared to the original. For example, the face of the main character bears a striking resemblance to the portraits of Cezanne. There are also features characteristic of Cezanne’s work of the 1860s, including an image of the noses, darkened eyes and thicker necks.

Although Cezanne had never traveled to Venice, he often spoke of his passionate admiration for Tintoretto’s work and considered him his favorite artist. Cezanne mentioned this picture in an interview published by Joachim Gasquet about his friend, Cezanne, in 1921.

But there is a scientific approach, De Groft and Spike decided that for this particular picture it would be advisable to carry out x-ray and infrared testing, which revealed several layers of paint and the presence of an unusual pigment movein (a violet diazine dye synthesized in the 19th century).

Kristin Wustholz said that the scientific examination did not find any reason to doubt the sign of Spike. She noted that science most often sets itself the task of technical analysis, and does not confirm the attribution of the picture. In the case of The Miracle of the Slave, science was able to add confidence to Spike’s version.

Kristin Wustholz, a chemistry professor, works in a seven-year partnership with Shelley Svoboda, senior custodian of paintings at Williamsburg Colonial Foundation. Together, they improved and advanced the technology for identifying pigments in historical paintings and other artifacts.

Susan Buck, an independent consultant, performed polarized light microscopy, obtaining some information from tiny samples that she had taken from the surface of the painting. But polarizing light microscopy requires large samples of the picture in order to get good results in identifying the pigment. The Freedom-Wustholz technique uses SERS Raman spectroscopy on the surface. This is a minimally destructive method that requires only the smallest sample and this is the most modern process for identifying synthetic organic pigment.

Freedom and Wustholz found a secret pigment in the picture, known as Movein. Mauvein is a synthetic organic compound discovered by chance in 1856 by the English chemist William Henry Perkin, who was trying to synthesize quinine from coal tar.

Scientists indicated that movein was produced only between 1856 and 1869, during which Cezanne was between the ages of 17 and 30. Just in this early romantic period, Cezanne copied the works of other artists.

Movovein’s popularity ended when people discovered that the pigment had a rather large Achilles heel. “The problem - and the reason why the story of the artist’s passion for movine lasts only 10 years, is that it is not truly colored. Its color is gradually fading, ”says Wustholz.

In the existing scientific literature there are many details about Cezanne, about his materials and his preferred methods, but the move is not mentioned in connection with him in any of the previously published catalogs.