"Alexander Hegello: between classic and constructivism" 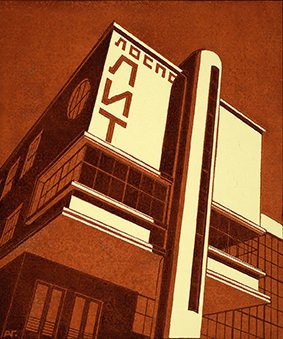 The creative career of the architect Alexander Ivanovich Hegello (1891 - 1965) began with projects in the classical spirit: this was facilitated not only by his native Petersburg, but also by the retrospective fashion of the 1910s, as well as by the powerful school of the Academy of Arts, where Hegello studied with Ivan Alexandrovich Fomin. In the 1920s, the architect created his most famous buildings - the A. Gorky Palace of Culture and the ensemble on Tractor Street. Like many other avant-garde projects of young Hegello, they are far from utopian ideas - the architect par excellence, he was primarily interested in the function, how it is embedded in a specific space.

Practicality and professionalism along with the ability to quickly respond to the needs of the era allowed Hegello to implement more than a hundred projects, mainly in Leningrad. In the late 1930s, when neoclassical trends in architecture began to dominate again, Hegello did not turn into a stylist, but continued deep internal work to rethink the classical heritage.

The purpose of the first Moscow monographic exhibition is to acquaint visitors with architectural projects and photographs from the Museum’s collection, donated by the widow of architect Nina Vasilievna and supplemented with photographs from the FSB archive in St. Petersburg. About a hundred works of original graphics reveal the amazing artistic talent of the architect, who was seriously interested in drawing, engraving, painting and used various techniques to effectively present his ideas.

Thanks to the design of the exposition, the exhibition will allow you to travel to Leningrad in the mid-1920s - early 1930s: one of the most memorable motives of the housing estate on Traktornaya Street and the Serafimovsky site - the semi-arch - will be built in the exhibition in accordance with real proportions and painted in its original color, and the model of the House of Technical Studies will allow you to feel the unusual volume of the entrance group.