Victor Korneev is a sculptor-symbolist, he has a special vision, penetration into the core of phenomena. His works are an alloy of drama and philosophy. In the art world of Korneev, not plots dominate, but concepts: In search of light, Full moon, Balance, Touch, Anticipation, Imagination, Remembrance, Communication, Generosity. Sculptures with epic names form a heroic landscape, open to everyone.

V. Korneev was born on July 24, 1958 in Tambov. He is a graduate of the Penza Art College. Savitsky and Art and Industrial Institute. Stroganova, a participant in more than a hundred exhibitions at major Russian and European venues. His works are in the collections of the State Tretyakov Gallery, the State Russian Museum, the Moscow Museum of Modern Art, other art museums and galleries in Russia, Sweden, Croatia, China, Cyprus.

Lives in Moscow and Sweden. In the Moscow workshop creates easel, exhibition works. In Sweden, the sculptor’s commitment is made to work in eternal materials, in the open air, in the natural environment, in the majestic northern landscape. 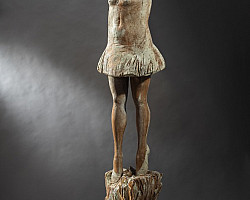 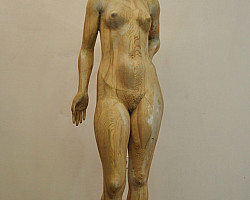 Korneev’s work is based on a deep knowledge of nature, the mastery of documentary possession of a sculptural form. No less significant is the imaginary world, the elusive matter of foreboding, the inexhaustible possibilities of creative intuition. Victor is committed to the laconic, epic vocabulary of granite forms. The material itself - granite, basalt, diabase, marble, as well as wood, inspire images that are scaled to nature. In the matter of stone, the artist feels compressed time, a thousand-year memory of nature.

The young infante gives the young infante a white flower, two children’s hands are highlighted as an approximate fragment (Flowers, 2006). Victor sculpted a hand in marble covering a ripe brush of grapes (Grapes, 2010). Touch gives rise to a cascade of associations: the abundance of autumn, the harvest festival, the triumph of Bacchus, the invisible hero reached the promised country.

The word of ancient myths and the Word of the Bible equally inspire the work of Korneev. He interprets classic plots in his own way, emphasizes hidden, non-obvious meanings. In all classical paintings and sculptures, Goliath is represented as a Philistine warrior, an invincible, ferocious giant. The victory over Goliath was a triumph and an honorary podium for young David.

In Victor Korneev, David is represented only by a fragment - with the foot of a foot gracefully placed on the head of a huge Titan. But Goliath is completely different, not warlike, in his face is meditation, doubt, regret. Perhaps here is a metaphor for the lost, once powerful and abundant superpowers. The power of Goliath has become the power of thought. The head is a purely sculptural idea, a common noun. A huge head steps over the human scale, becomes an irresistible psychological monument.

The anthropomorphic figure is the main object in the work of Korneev. The skill of the sculptor is clearly manifested in the classical genre of the nude model, at the heart of most of his works is work from nature. Initially, the sketch is created as an image of the future park, landscape composition. In large sculptures, as in small ones, the game triumphs, the dynamics of character, the brightness of direct perception of nature.

Korneev is inspired by the art of archaic and the discovery of European plastic of the twentieth century. He pays tribute to the neoclassical - Giacomo Manzu, Marino Marini, Francesco Messina. His idols are the great metaphysician Rene Magritte, the great sculptors Alberto Giacometti, Henry Moore. He inherits from them the idea of ​​an animated, changeable space, in the center of which is the psychology of the beholder.

In granite and marble, Victor created a series of experimental sculptures that addressed the realm of sensations, premonitions, elusive phenomena. Landscapes of consciousness explore characters invented by the sculptor. In the sculpture Communication (2007), two characters enter into dialogue. One has a blindfold over the blindfold, the other blindfolded. However, the restrictions do not impede the movement of thought; the characters are united by a magic dialogue without words. For Victor, the images of vision, vision, gaze, sound and soundlessness are especially significant.

Korneev embodies metaphors. He created portraits of two unusual people - researchers of silence ("Silence", marble, granite, 2010). They study mysterious matter, enter silence, plunging into it with their whole body to eye level. The main thing is to hold your breath, which is not difficult for a specialist. Fragments of two heads rise above the level of silence. In the eyes of travelers, fear and determination. They go to explore the bowels of silence. They are looking for a magical source, where the blessed river of communication originates from and where.

In the expanded author’s expositions, the artist builds his own metaphorical spaces with a complex structure, plasticity and depth, where the free space between the sculptures is of great importance. Pauses, caesures create an atmosphere of emotional concentration, tension and meditation. Victor contrastly combines voluminous sculptures and a series of chamber graphic wall reliefs. The effect of double narration, dialogue is created. Each Korneyev’s project is organized in accordance with a pre-thought out author’s concept, as a single exhibition-installation with its own direction, intrigue, reflection, light and musical scores. Such can be called the landmark project “Three Rooms” for the master, where the space of three rooms was magically transformed by three sculptural installations: “Among the Pillars”, “Trying to Remember”, “Anticipation”.

Victor Korneev inherits, develops artistic ideas and discoveries of masters of the twentieth century. The main vectors of his work are the path in the labyrinth of phenomena, the path and return, memory and memories, balance and balance, the sound of silence and a touch of light, a gaze obscured by an obstacle and an open, free gaze.