October 24, 2015 at 15. 00 on the site of the theater "Center for Drama and Director" will show the premiere performance for children "Big Fur Dad." The author is Ksenia Dragunskaya, the director is Olga Subbotina. Cast: V. Balashov, A. Kiryushin, S. Kuramshina, V. Skorokhodova, A. Nepomnyashchy, A. Zanin, A. Aloris, A. Sanchez Girel, P. Nesterova, M. Merzlikina, A. Smirnova, A. Tyufyakina, M. Erisova, O. Khokhlov, A. Yarmilko, A. Subbotin, E. Yeskov. 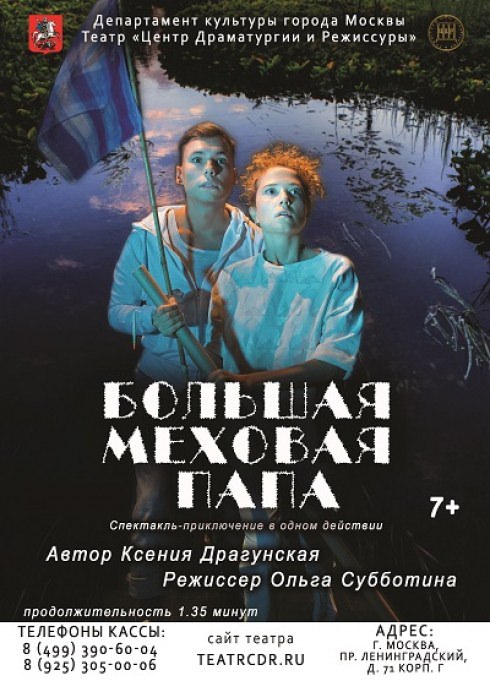 Big Fur Dad is a one-act adventure play. In a small Russian village called Ezhkiny Cats, restless, restless, but absolutely amazing children live. They adore their village, because there is a forest with mushrooms and berries, a small warm river, and even an abandoned palace with a ghost! Children go to school, where they study general subjects and study English hard. At the same time manage to indulge. And then one day they got into a bed so that they call dads to school! Everything would be fine, but only the young inhabitants of Ezhkin’s Cats are brought up to their mothers as one. Children decide to find their real dads, to find which helps children friendship and resourcefulness. And one boy will even accomplish a feat.

Increasingly, in today’s world, children are brought up in single-parent families. And only adults can change this situation. For the children, it remains, with all their spontaneity, to find their solutions to complex adult problems.

Duration of the performance: 1 hour 35 minutes.

The priority area of ​​the Center for Drama and Directing is to help young playwrights, actors, directors, theater critics, artists, musicians and dancers.

Grants of the Department of Culture are being implemented at the venues of the theater.

The project “Moscow Cultural Centers” is being successfully implemented, the main task of which is to introduce residents of the outskirts of Moscow to theatrical art.

Official site of the theater "Center for Drama and Director" http://teatrcdr.ru/